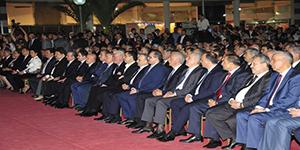 Addressing the participants, Khamis said that inaugurating this great event sends a message to the entire world that the Syrian people’s Will of Life is stronger than terrorism, expressing high appreciation of the sacrifices made by heroes of the Syrian army, their allies and the Resistance in order to be here together.
The Prime Minister conveyed President al-Assad’s greetings and best wishes that the event would be successful, welcoming all participants from the friendly and Arab countries on behalf of His Excellency.
He said that Damascus International Fair returns after six years of suspension, during which the Syrians have offered their blood and souls for the sake of the homeland, its sovereignty and territorial integrity.
The premier also underlined the great efforts exerted over the past few months to provide appropriate atmosphere to organize the fair and make it a success.

He added that the main objectives of states which conspired against Syria and the unjust unilateral economic sanctions were to undermine the Syrian state, destroy its institutions, infrastructure and production facilities, and loot its natural resources.
Khamis said that the inauguration of this fair and the wide local and international participation officially declares the failure of this war which targets the Syrian people’s determination and steadfastness.
“As the Syrian army, in cooperation with its allies, continues to achieve victories on the ground and restores more territories, the Syrian government is working hard to rerun production wheel and boost its capabilities and investments to alleviate the suffering of Syrian citizens as a result to the terrorist war and economic blockade,” said Khamis.
He noted that the Fair aims at introducing national products and goods, opening new export markets, discuss joint investment opportunities and encourage Syrian expatriates to come back home and contribute to the rebuilding and development of their country.

Premier Khamis stressed the government’s readiness to offer all forms of support to further enhance its economic cooperation with other states and provide facilitations required to make a success the implementation of contracts and cooperation projects to be signed during the Fair.
He underlined the determination of industrialists who headed to their factories and workshops to rehabilitate and rerun them and the positive contribution of the youth through the launching of several national initiatives in the fields of humanitarian aid and development.
He pointed out that the support provided by Syria’s friends and allies to revive the most prominent economic, social, cultural and artistic event indicates that Syria is not alone in its battle against terrorism which poses a serious threat to the entire world and that all attempts to isolate the country have failed despite its repercussions on the citizens’ living conditions, economic status and health.
Khamis referred to the key role of Syria’s strategic position in foiling the boycott and blockade attempts, not to mention the Syrian state’s policy of openness to other countries, special interest in peoples’ just causes and its support to them against colonialism and domination powers.

The premier reiterated Syria’s keenness to consolidate cooperation relations with all countries, adding that doors are always open to all investors and businessmen to have an active role in making investments and establishing economic partnerships that meet the Syrian people’s aspirations and enable Syria to restore its economic position in the region and worldwide.
He stressed that the national project for administrative reform launched by President al-Assad will help overcome obstacles hindering investments, particularly bureaucracy, indicating that the government is putting the finishing touches to modernize the law regulating investments.
Premier Khamis underlined the need to establish a unified economic bloc and build an economic system that preserves sovereign decisions and break down unjust economic blockade and procedures which deprived children from milk and food and the patients from their medicines.