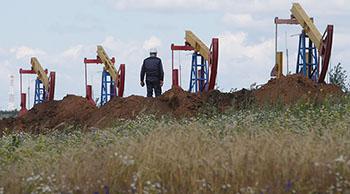 Crude production data for June shows Russia remains the world’s largest oil producer, according to the Joint Organizations Data Initiative (JODI).
Russia produced 10.36 million barrels per day (bpd) during the month, while Saudi Arabia pumped slightly above 10 million bpd.
The volume of production in Russia, according to the organization, increased by 0.47 percent in comparison with May, while Saudi Arabia saw a 1.92 percent growth.

Saudi oil exports dropped to the lowest level since 2014, as the kingdom sold 6.9 bpd abroad.
JODI explains the Saudi boost in crude production with the Muslim month of Ramadan when the use of electricity surges. It lasted from May 27 to June 25 this year.
Saudi crude stockpiles stood at 256.6 million barrels, the lowest since January 2012, the report says.
“You can assume exports will fall even further going forward because they can’t keep running down stockpiles. It is clear the rebalancing process is in full swing, we are drawing down stockpiles everywhere,” said Amrita Sen, an analyst at Energy Aspects, as quoted by Bloomberg.
OPEC’s second largest producer, Iraq, reduced oil production in June by 0.31 percent, to 4.55 million bpd, according to the report.
Crude prices were down slightly on Thursday, as Brent slid 0.02 percent to $50.25 per barrel, while the US West Texas Intermediate stood at $46.71.
The US Energy Information Administration (EIA) reported on Wednesday that commercial US crude oil stocks dropped by almost 13 percent from their peak in March to 466.5 million barrels. The US oil reserves are now the lowest this year.
“If inventory declines continue at this pace, stocks will fall back below the five-year average in around two months,” said William O’Loughlin, an analyst at Australia’s Rivkin Securities, as quoted by Reuters.