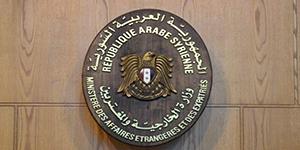 Damascus, SANA-Foreign and Expatriates Ministry called on UN Security Council to assume its responsibilities in keeping the international peace and security and halting the crimes of the international coalition led by the United States against the innocent Syrian civilians.

The Ministry addressed two letters to UN Secretary General and President of the Security council about the continued brutal attacks of the “international coalition” against Syrian people, saying that the aircrafts of the US-led coalition attacked on August 16th the residential neighborhoods of Raqqa city, leaving 17 innocent civilians dead and injuring many others, most of them were children and women, and causing material damage to infrastructure and properties.
“The US-led coalition also deliberately targeted the Church of Our Lady of the Annunciation in al-Thukana neighborhood in Raqqa, destroying it completely, despite the fact that there were no ISIS members inside it,” the Ministry affirmed.
It went on to say that that the US-led coalition bombing of residential neighborhoods by using missile arsenals, guided bombs and internationally- banned white phosphorus bombs has become a systematic and deliberate behavior of this coalition in extreme disregard of the international humanitarian law and human rights rules.
The Ministry added that while the Syrian Arab Republic reiterates its condemnation of the international coalition’s crimes against Syrian civilians which constitute war crimes and crimes against humanity, calls on the states participating in this coalition to immediately dissolve it as it was established outside the framework of the UN and without requesting any permission from the Syrian government.
“Syria calls on UNSC to assume its responsibilities in preserving international peace and security and stopping the crimes of the international coalition against Syrian civilians,” the Ministry concluded.
Manar/Mazen