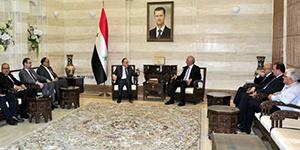 Damascus, SANA-Prime Minister Imad Khamis met on Thursday Lebanese ministers of Agriculture and Industry Ghazi Zaiter and Hussein Hajj Hassan separately and discussed with them means to develop the economic relations between the two brotherly countries, especially in the agricultural and industrial fields.

Khamis expressed his appreciation for this visit and the participation of Lebanese companies in Damascus International Fair, pointing out the importance of enhancing cooperation between the two countries for the benefit of the two brotherly peoples.
For his part, Zaiter congratulated the Syrian people on the victories achieved on the terrorists in various Syrian territories, stressing that the launch of the Damascus International Fair represents a declaration of victory for Syria in its war on terrorism and the start of the recovery of the Syrian economy.
In turn, Hajj Hasan affirmed the importance of working to expand areas of cooperation and coordination in the industrial and commercial fields.
Manar/Haifa