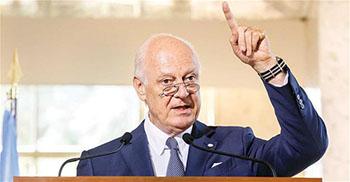 The United Nations hopes for “serious negotiation” between the government and a still-to-be-formed unified Syrian opposition in October or November, the U.N. Special Envoy Staffan de Mistura said yesterday.

“Regarding the (Syrian) government, we are counting very much on Russia, on Iran, on anyone who has got major influence, and on the government of Syria to be ready finally to initiate when they are invited to Geneva, a genuine, direct negotiation with whatever (opposition) platform comes out,” he told reporters.

De Mistura also said that the declaration of so-called de-escalation zones has been “so far positive,” and hailed a Russian initiative to help bring aid to besieged Syrians.

The envoy said 50 trucks reached the besieged town of Douma northeast of Damascus yesterday, the first aid convoy there since May. That resulted from an Aug. 2 letter he received from Russian Defense Minister Sergei Shoigu promising Russian military “observation points” to facilitate movements within Syria.

Meanwhile, the United States-led coalition air strikes aimed at dislodging the Islamic State of Iraq and the Levant (ISIL) jihadists from the Syrian city of Raqqa have cost the lives of 59 civilians in three days, a monitoring group said yesterday.

The Syrian Observatory for Human Rights said 21 children were among at least 59 civilians killed in the air strikes since Aug. 14, after more corpses were dug out from under piles of rubble.