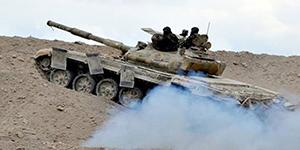 Provinces, SANA- Army units engaged in sporadic clashes with ISIS-affiliated terrorist groups on the axes of al-Rushdieh neighborhood, al-Maqaber “cemeteries” and the Airport in Deir Ezzor and its surroundings, killing scores of terrorists.

SANA reporter in Deir Ezzor said that the clashes were accompanied by intensive airstrikes carried out by the Syrian Air Force against ISIS terrorists’ gatherings and positions in the neighborhoods of al-Rushdieh and al-Hwaiqa, the surroundings of Regiment 137, the area of al-Mawared, the surroundings of al-Taem field, al-Panorama area and al-Masrab village.

The reporter added that many ISIS terrorists were killed in the airstrikes, including one of their commanders nicknamed “Abu al-Abbas”, in addition to destroying their vehicles, weapons, ammunition.

The reporter quoted civil sources from al-Hura village in Abu Kamal countryside as saying that a group of the locals attacked a meeting place for ISIS terrorists on the road of Abu Kamal-al-Qaem, killing terrorists Abu Omar al-Masri and Abu Tarek al-Masri who are leaders of the so-called “Euphrates State” and injuring others.

Meanwhile, civil sources in the northern countryside of the province indicated that a number of locals in al-Khabour area clashed with ISIS terrorists who opened fire randomly towards the locals , claiming the life of a civilian.

Units of the army advanced 13 km on the road of Athrya-Twinan-al-Karim, having control on many strategic heights in Hama eastern countryside.