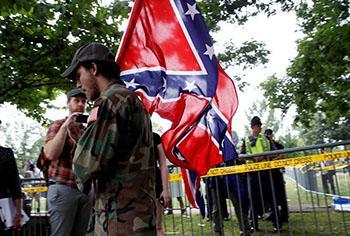 An analysis of Stormfront forums shows a sometimes sophisticated understanding of the limits of ancestry tests.
A white nationalist carries the Confederate flag as he arrives for a rally in Charlottesville, Virginia. Joshua Roberts / Reuters
This week on Radio Atlantic:Ta-Nehisi Coates and Yoni Appelbaum on Charlottesville’s Aftermath. Listen and subscribe to the podcast.

The white-nationalist forum Stormfront hosts discussions on a wide range of topics, from politics to guns to The Lord of the Rings. And of particular and enduring interest: genetic ancestry tests. For white nationalists, DNA tests are a way to prove their racial purity. Of course, their results don’t always come back that way. And how white nationalists try to explain away non-European ancestry is rather illuminating of their beliefs.
Two years ago—before Donald Trump was elected president, before white nationalism had become central to the political conversation—Aaron Panofsky and Joan Donovan, sociologists then at the University of California, Los Angeles, set out to study Stormfront forum posts about genetic ancestry tests. They presented their study at the American Sociological Association meeting this Monday. (A preprint of the paper is now online.) After the events in Charlottesville this week, their research struck a particular chord with the audience.
“For academics, there was some uneasiness around hearing that science is being used in this way and that some of the critiques that white nationalists are making of genetics are the same critiques social scientists make of genetics,” says Donovan, who recently took up a position at the Data and Society Research Institute. On Stormfront, the researchers did encounter conspiracy theories and racist rants, but some white-nationalist interpretations of genetic ancestry tests were in fact quite sophisticated—and their views cannot all be easily dismissed as ignorance.
“If we believe their politics comes from lack of sophistication because they’re unintelligent or uneducated,” says Panofsky, “I think we’re liable to make a lot of mistakes in how we cope with them.”
Panofsky, Donovan, and their team of researchers analyzed 3,070 Stormfront posts spanning more than a decade—all from forum threads in which at least one user revealed the results of a DNA test. Some of the results were 100 percent European, as users expected. But often—surprisingly often, says Panofsky—users disclosed tests results showing non-European ancestry. And despite revealing non-European ancestry on a forum full of white nationalists, they were not run off the site.
“You are simply related to some white fool who left some of his DNA with the locals in what is now Senegal.”
While some commenters reacted with anger, many reacted by offering up arguments to explain away the test results. These arguments largely fell into two camps.
First, they could simply reject all genetic ancestry testing. Genealogy or the so-called mirror test (“When you look in the mirror, do you see a Jew? If not, you’re good”) were better tests of racial purity, some suggested. Others offered up conspiracies about DNA testing companies led by Jews: “I think 23andMe might be a covert operation to get DNA the Jews could then use to create bio-weapons for use against us.”
The second category of explanation was a lot more nuanced—and echoed in many ways legitimate critiques of the tests. When companies like 23andMe or AncestryDNA return a result like 23 percent Iberian, for example, they’re noting similarities between the customer’s DNA and people currently living in that region. But people migrate; populations change. It doesn’t pinpoint where one’s ancestors actually lived. One Stormfront user wrote:
See, THIS is why I don’t recommend these tests to people. Did they bother to tell you that there were whites in what is now Senegal all that time ago? No? So they led you to believe that you’re mixed even though in all probability, you are simply related to some white fool who left some of his DNA with the locals in what is now Senegal.
Panofsky notes that legitimate scientific critiques are often distorted by a white-nationalist interpretation of history. For example, the mixing of DNA in a region would be explained by the heroic conquest of Vikings. Or a white female ancestor was raped by an African man.
The team also identified a third group of reactions: acceptance of the genetic ancestry test results. Some users did start to rethink white nationalism. Not the basic ideology—Stormfront’s forums are not exactly the place you would do that—but the criteria for whiteness. For example, one user suggested a white-nationalist confederation, where different nations would have slightly different criteria for inclusion:
So in one nation having Ghengis Khan as your ancestor won’t disqualify you, while in others it might. Hypothetically, I might take a DNA test and find that I don’t qualify for every nation and every nation’s standards, though I’m sure that at least one of those nations (and probably many of them) will have standards that would include me
Another user dug deep into the technical details of genetic ancestry testing. The tests can rely on three different lines of evidence: the Y chromosome that comes from your father’s father’s father and so on, the mitochondrial DNA that comes from your mother’s mother’s mother and so on, and autosomal DNA that can come from either side. One user suggested that a purity in the Y chromosome and mitochondrial DNA were more important than in the autosomal DNA. But others disagreed.
Sociologists have long pointed out the categories of race are socially constructed. The criteria for who gets to be white—Italians? Arabs? Mexicans?—are determined by social rather than biological forces. And DNA is the newest way for white nationalists to look for differences between the races.
In these years of posts on Stormfront, you can see users attempting to make sense of DNA, figuring out in real time how genetics can be used to circumscribe and preserve whiteness. The test results are always open to interpretation.