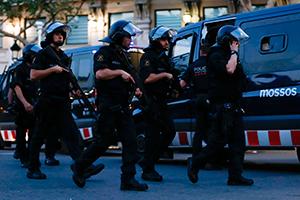 World leaders are united in their condemnation of the terrorist attack in Barcelona which claimed the lives of 13 people. Nationals from at least 18 countries fell victim to the van plowing massacre in the busy Las Ramblas district of the city which also injured over 110 people.
TrendsCatalonia terror attacks, Islamic State, Terrorism in Europe
Russia