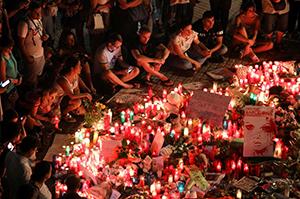 Andrés González, Angus Berwick and Carlos Ruano
BARCELONA (Reuters) – The driver of the van that plowed into crowds in Barcelona, killing 13 people, may still be alive and at large, Spanish police said on Friday, denying earlier media reports that he had been shot dead in a Catalan seaside resort.

Josep Lluis Trapero, police chief in Spain’s northeastern region of Catalonia, said he could not confirm the driver was one of five men killed.
“It is still a possibility but, unlike four hours ago, it is losing weight,” he told regional TV.
The driver abandoned the van and fled on Thursday after speeding along a section of Las Ramblas, the most famous boulevard in Barcelona, leaving a trail of dead and injured among the crowds of tourists and local residents thronging the street.
It was the latest of a string of attacks across Europe in the past 13 months in which militants have used vehicles as weapons – a crude but deadly tactic that is near-impossible to prevent and has now killed nearly 130 people in France, Germany, Britain, Sweden and Spain.
Suspected jihadists have been behind the previous attacks. Islamic State said the perpetrators of the latest one had been responding to its call to target countries involved in a U.S.-led coalition against the Sunni militant group.
Hours after the van rampage, police shot dead five people in the Catalan resort of Cambrils, 120 km (75 miles) down the coast from Barcelona, after they drove their car at pedestrians and police officers.
The five assailants had an ax and knives in their car and wore fake explosive belts, police said. A single police officer shot four of the men, Trapero said.
A Spanish woman was killed in the Cambrils incident, while several other civilians and a police officer were injured.
Trapero had earlier said the investigation was focusing on a house in Alcanar, southwest of Barcelona, which was razed by an explosion shortly before midnight on Wednesday.
Police believe the house was being used to plan one or several large-scale attacks in Barcelona, possibly using a large number of butane gas canisters stored there.
However, the apparently accidental explosion at the house forced the conspirators to scale down their plans and to hurriedly carry out more “rudimentary” attacks, Trapero said.
FOUR ARRESTS
People gather around an impromptu memorial a day after a van crashed into pedestrians at Las Ramblas in Barcelona, Spain August 18, 2017.Sergio Perez
Police have arrested four people in connection with the attacks – three Moroccans and a citizen of Spain’s North African enclave of Melilla, Trapero said. They were aged between 21 and 34, and none had a history of terrorism-related activities.
Another three people have been identified but are still at large. Spanish media said two of them may have been killed by the blast in Alcanar while one man of Moroccan origin was still sought by the police.
Police in France are looking for the driver of a white Renault Kangoo van that may have been used by people involved in the Barcelona attack, a French police source told Reuters.
WORST SINCE 2004
It was the deadliest attack in Spain since March 2004, when Islamist militants placed bombs on commuter trains in Madrid, killing 191 people.
Of 126 people injured in Barcelona and Cambrils, 65 were still in hospital and 17 were in a critical condition. The dead and injured came from 34 countries, ranging from France and Germany to Pakistan and the Philippines.
U.S. Secretary of State Rex Tillerson said an American citizen was confirmed dead, and Spanish media said several children were killed.
As Spain began three days of mourning, people returned to Las Ramblas, laying flowers and lighting candles in memory of the victims. Rajoy and Spain’s King Felipe visited Barcelona’s main square nearby to observe a minute’s silence.
Defiant crowds later chanted “I am not afraid” in Catalan.
Foreign leaders voiced condemnation and sympathy, including French President Emmanuel Macron, whose nation has suffered some of Europe’s deadliest recent attacks.
German Chancellor Angela Merkel, speaking after media reports that some Germans were among those killed, said Islamist terrorism “can never defeat us” and vowed to press ahead with campaigning for a general election in Germany in September.
King Mohammed VI of Morocco sent his condolences to Spain.
U.S. President Donald Trump, speaking by phone with Spanish Prime Minister Mariano Rajoy on Friday, pledged the full support of the United States in investigating the attacks in Barcelona and Cambrils and bringing the perpetrators to justice.
In a message to the cardinal of Barcelona, Pope Francis said the attack was “an act of blind violence that is a grave offense to the Creator”.
Polish Interior Minister Mariusz Blaszczak said the attack showed the European Union’s system of migrant relocation was wrong. “It is dangerous. Europe should wake up,” he said. “We are dealing here with a clash of civilisations.”
Additional reporting by Julien Toyer, Sarah White, Andres Gonzalez, Silvio Castellanos and Kylie MacLellan; Writing by Adrian Croft and Julien Toyer; Editing by Mark Trevelyan and Lisa Shumaker