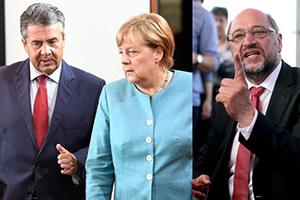 By TM
German Foreign Minister Sigmar Gabriel responded to remarks made by Turkish President Recep Tayyip Erdoğan on Friday after he urged Turks living in Germany not to vote for parties of the ruling coalition and called it an unprecedented attack on German sovereignty.

Speaking to the RedaktionsNetzwerk media group on Friday, Gabriel slammed Erdoğan’s remarks and said Erdoğan’s interference in Germany’s electoral campaign shows that he wants to incite people in Germany against each other.
“That is an unprecedented act of interference in the sovereignty of our country,” Gabriel said according to the Luxemburger Wort website.
Warning Turkish voters in Germany against voting for the Social Democratic Party (SDP), Christian Democrats and Greens, Erdoğan said: “I am calling on all our citizens in Germany. Don’t make a mistake and vote for them. SDP, Christian Democrats, Greens… Never. Vote for parties that are not enemies of Turkey. This, now, is a struggle for honor for my Turkish citizens living in Germany.”
Speaking during a party rally in Herford on Friday, German Chancellor Angela Merkel said she would not tolerate any interference in the German elections.
“All German citizens, including those with a Turkish background, have the freedom to vote. We will not show any toleration for any interference,” she said.
SPD leader and a candidate for German chancellor, Martin Schulz, also responded to Erdoğan’s remarks on Twitter.
“Erdoğan has lost every measure. All the more, we are on the side of all those who are fighting for a free and democratic Turkey,” he tweeted on Friday.
Following a series of disputes between the two NATO allies due to Turkey’s crackdown in the wake of a botched coup attempt last summer, Merkel recently said a customs union agreement between Turkey and the European Union should not be expanded unless the tension eased with Turkey.
Holding Germany’s strategy responsible for the tension between the two countries, Erdoğan said Germany had carried its domestic crises to that level and had become a country that does not comply with the EU.
Erdoğan also accused the EU of not keeping its promise of allowing visa-free travel to Turkey and of not providing the promised financial assistance.