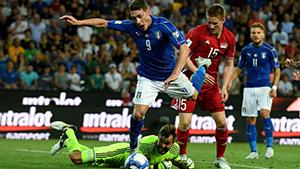 Diego Costa has accused Chelsea of pricing him out of a return to Atletico Madrid.

Tottenham boss Mauricio Pochettino wants to sign at least three more players before the close of the transfer window after sealing a deal for Davinson Sanchez.

Arsene Wenger is ready to give defender Calum Chambers another chance at Arsenal after selling Gabriel to Valencia.

Swansea are hopeful of a £15m move for West Brom’s Nacer Chadli after selling Gylfi Sigurdsson to Everton.

Burnley are set to land Leeds striker Chris Wood in a £15m deal.

Manchester City will not be held to ransom over Jonny Evans, with Pep Guardiola having identified other options at centre-back should West Brom not agree with their valuation of the Northern Irishman.
DAILY EXPRESS

Jose Mourinho has told Antonio Conte that Chelsea cannot blame the £40m sale of Nemanja Matic to Manchester United for their problems.

Arsene Wenger has described his decision to bring Sead Kolasinac to Arsenal as a ‘no-brainer’.

Steve Bruce is under increasing pressure but in combative mood after launching a withering attack on the “vile” trolls demanding his sacking at Aston Villa.
DAILY RECORD

Former Scotland international Garry O’Connor has claimed he could have signed for Arsenal when he left Lokomotiv Moscow in 2007.