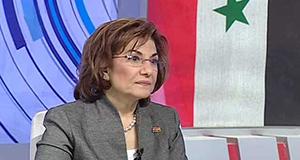 Damascus, SANA – Presidential Political and Media Advisor Bouthaina Shaaban affirmed that the re-launch of Damascus International Fair at this time and with this high local and international turnout is very symbolic and sends a message that the war in Syria is going to an end and that terrorism will be totally eliminated and that “we are at the beginning of the road towards reconstruction.”

Shaaban said her remarks during an interview with al-Mayadeen TV channel at the Fair Ground in Damascus.
She expressed optimism that the Syrian determination will encourage steps towards achieving a regional political, economic and developmental project to be proud of in the future.
Shaaban referred to the visit of the Lebanese Ministers and their participation in the Damascus international fair, stressing that the exchange of visits between Syria and Lebanon should be normal as both countries share history, geography and interests.
The Advisor also referred to the Egyptian participation in the Fair.
“We welcome any Arab country that believes that cooperation and integration with Syria and other Arab countries is a prerequisite for the advancement of the Arabs in the next stage,” Shaaban said.
Regarding the statements of the UN special Envoy for Syria Staffan de Mistura that September will see the beginning of qualitative shifts in the crisis in Syria, Shaaban said that this transformation has already occurred and has been imposed by the Syrian Arab Army and its allies since the liberation of Aleppo from terrorism.
Shaaban said that war against Syria has changed the world with the decline of the strength and dominance of the West on the one hand in favor of the rise of Russia, China, India, Brazil and Iran on the other hand.
Regarding the US coalition’s crimes against the civilians in Raqqa and Deir Ezzor, the Advisor said that there is a U.S. attempt to terrorize the residents and displace them aimed at finding a ground for division or what it called “federalism”, stressing that the U.S. presence is illegal and the Syrian people are one people.
She affirmed that the United States will not be able to impose on the Syrian people any division, federalism or policies stemming from either ignorance or misjudgment.
“As we defeated terrorism, we will fight against any illegal presence on our land whether being that of the United States or Turkey,” Shabban said.
Shaza/H. Said