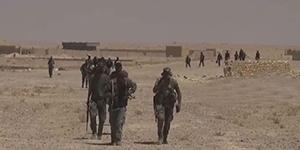 The source said that army units are targeting the convoys of ISIS terrorists trying to flee Uqayrbat area, inflicting huge losses upon them.
According to the source, the army has managed to liberate 9,000 square kilometers in the period between August 2-17, which includes 25 towns and villages, 4 oil and gas fields, a factory, and Tweinan station, killing hundreds of terrorists and destroying 4 tanks, 3 armored vehicles, more than 30 assorted vehicles and rocket launchers, 14 munitions depots, and 18 bases.
Earlier today, army units operating in the countryside of Homs and Hama made significant progress against ISIS terrorists, and encircled large numbers of them in Uqayrbat town in eastern countryside of Salamyia in Hama.
SANA reporter in Hama said that the army units, in cooperation with the supporting forces, clashed during the past hours with ISIS terrorist groups on the axis of Tel al-Sawwaneh in eastern countryside of Homs and on the axis of al-Fasideh village in eastern countryside of Salamiya.
The reporter said that the clashes ended up with encircling a large group of ISIS terrorists in Uqayrbat town in Salamyia countryside, after inflicting heavy losses upon them in personnel and arms.
The reporter noted that the army units thwarted all the ISIS attacks targeting the advancing forces to foil the siege on the terrorists, killing or injuring scores of the terrorists.