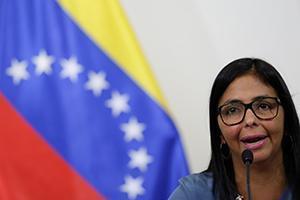 President Nicolas Maduro sponsored last month’s election of the 545-member constituent assembly over objections from the opposition, which boycotted the vote, calling it an affront to democracy. In its first session on Aug. 5 the assembly fired Ortega, who had accused Maduro of human rights violations.
The oil-rich but economically ailing country has seen months of political unrest in which more than 125 people have died.
Ortega arrived in neighboring Colombia on Friday, migration authorities in Bogota said. She told Reuters in an Aug. 10 interview that she feared for her life in Venezuela, although she still considered herself the country’s chief prosecutor.
U.S. State Department meanwhile joined South American trade bloc Mercosur in condemning the new super-assembly.
“As long as the Maduro regime continues to conduct itself as an authoritarian dictatorship, we are prepared to bring the full weight of American economic and diplomatic power to bear in support of the Venezuelan people as they seek to restore their democracy,” the State Department said in a statement.
In practice, the assembly’s assumption of legislative power changed little in Venezuela, where the Supreme Court has shot down nearly every law that congress has approved since it was taken over by the opposition in 2016.
Delcy Rodriguez, a Maduro ally and president of the constituent assembly, insisted the move did not imply a dissolution of the congress.
“Those lazy bums have to work. What we are doing is telling them: ‘Gentlemen, we are not going to let you take a holiday’,” Rodriguez said in a reference to opposition legislators.
But trade bloc Mercosur condemned what it called a usurpation of legislative power, according to a statement released by Brazil’s Foreign Ministry. Mercosur founding members Brazil, Argentina, Uruguay and Paraguay will not recognize any measures taken by the assembly, the statement said.
Delcy Rodriguez (C), president of the National Constituent Assembly, speaks during a meeting of the Truth Commission in Caracas, Venezuela August 16, 2017.Ueslei Marcelino
The assembly had invited leaders of the existing congress to join the session. Congressional leaders did not attend, insisting it was fraudulently created and usurped their powers.
“(Congress) only obeys the constitution and the people. We do not recognize the constituent assembly, much less subordinate ourselves to it,” Freddy Guevara, an opposition politician and vice president of the congress, wrote on Twitter.
‘EXTORTION RING’
“This afternoon the attorney general of Venezuela Luisa Ortega Diaz arrived from Aruba in a private plane to Bogota’s airport and completed the corresponding migration process,” Colombia’s migration agency said in a statement.
She was accompanied by her husband, the legislator German Ferrer, the agency added. It was not clear whether the couple were seeking asylum in Colombia.
Her replacement, ex-human rights ombudsman Tarek Saab, this week outlined corruption accusations against Ortega and her husband. The couple is accused of running an “extortion gang” and funneling profits into an account in the Bahamas.
Maduro pushed for the creation of the constituent assembly on promises it would bring peace to the country.
Anti-government demonstrations have run out of steam since the assembly’s July 30 election as opposition leaders prepare candidates for gubernatorial elections expected in October. Many opposition supporters are demoralized and the assembly shows no sign of letting up the political pressure.
It has formed a truth commission to investigate opposition gubernatorial candidates to see if played a role in any violent protests over the last four and a half months. If found to have done so they may face charges under a proposed “law against expressions of hate and intolerance,” backed by Maduro.
Rights groups say the measure is worded so vaguely that it could be used to prosecute nearly anyone who voices dissent.
Additional reporting by Corina Pons, Brian Ellsworth, Andreina Aponte in Caracas, Lisandra Paraguassu in Brasilia and Eric Walsh in Washington; Editing by James Dalgleish, Robert Birsel