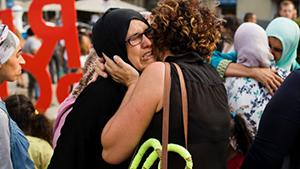 Barcelona: Catalonia’s police chief says he cannot rule out that the last suspect still believed to be at large in the Barcelona attacks may have crossed to France.

“We don’t have any specific information on this but it cannot be ruled out,” Josep Lluis Trapero told a news conference in Barcelona on Sunday, adding that border checks had been reinforced immediately after the attacks.

Earlier, police said a manhunt was centred on Younes Abouyaaquoub, a 22-year-old Moroccan suspected of driving the van that ploughed into Las Ramblas, a packed Barcelona promenade, on Thursday, killing 14 people and injuring more than 120.

Police linked three rental vans to the main fugitive from an Islamic extremist cell that carried out deadly vehicle attacks in Barcelona and a nearby seaside resort.

A police official says all three vans were rented using the credit card of Abouyaaquoub.

The massive manhunt for Abouyaaquoub is centred in the area around the town of Manlleu, north of Barcelona.

Abouyaaqoub, a resident of Ripoll, was reported to have frequented Manlleu, so investigators have focused there given the possibility that someone might have given refuge to the fugitive.

Abouyaaqoud’s mother took part in a rally at Ripoll town hall square on Saturday and said she repudiated the attacks, asking her son to turn himself in.

She said it was difficult for her to believe that her son was a member of the terror cell.

A cousin, Fatima Abouyaaqoud, said she was convinced that a local imam, Abdelbaki Es Satty, had radicalised her relative and the other local youths allegedly involved in the attacks.

Investigators also raided and searched the imam’s home in Ripoll looking for evidence and DNA samples.

Experts want to be able to verify if the religious leader, who has disappeared, is one of those killed in an explosion that rocked a house in Alcanar on Wednesday when a makeshift bomb factory blew up, destroying what investigators believe was the cell’s bomb arsenal and killing at least two suspected cell members.

Biological remains belonging to three people have so far been found in the rubble, according to sources consulted by EFE.

Even with Abouyaaquoub at large, Spanish Interior Minister Juan Ignacio Zoido declared the cell “broken” on Saturday. In addition to the five killed by police, four were in custody and one or two were killed in a house explosion on Wednesday. He said there was no new imminent threat of attack.