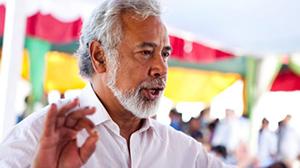 Lindsay Murdoch
Bangkok: The hero of East Timor’s independence, Xanana Gusmao, will continue to lead his country’s sensitive negotiations over maritime boundaries with Australia despite his party losing office in the July elections.

For years Mr Gusmao has refused to budge on his insistence that gas from the still undeveloped Greater Sunrise field in the Timor Sea be piped across a 3000-metre seabed chasm, known as the Timor Trench, to East Timor.

He insists that a maritime resources boundary between Australia and East Timor be shifted to put the $50-billion Greater Sunrise field entirely under East Timor’s jurisdiction.

A three-party coalition that will form government in Dili confirmed Mr Gusmao’s authority to represent East Timor in negotiations being supervised by the Permanent Court of Arbitration at The Hague.

Mr Gusmao was quoted by the Portuguese newsagency Lusa as saying “I am grateful for the confidence the coalition has placed in me”.

Negotiations, which are due to be settled in October, resume this week.

Development of Greater Sunrise is critical to the future of Asia’s newest nation as revenues from existing oil and gas reserves run out in the next several years.

Analysts say the country could be broke within a decade unless other resources are developed.

But even if an agreement is reached on the boundaries, Greater Sunrise may still not be developed at a time of low gas prices and the possible opening up of other fields.

Greater Sunrise’s developers, led by Woodside Petroleum, have rejected East Timor’s demand the gas be piped to an industrial complex on the country’s remote west coast, saying they favour a floating liquefied-gas plant.

Another option is to pipe the gas across shallower waters to an existing gas plant in Darwin.

Mr Gusmao has announced his National Congress for Timorese Reconstruction (CNRT) would serve in opposition after narrowly losing to Fretilin, saying he would “contribute positively and constructively” in parliament.