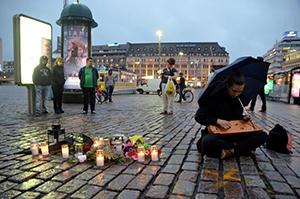 HELSINKI/TURKU, Finland (Reuters) – A Moroccan man who was arrested for killing two women in a knife rampage was an asylum seeker who appeared to have targeted women in Finland’s first terrorism-related attack, police and a Red Cross official said on Saturday.

The 18-year-old suspect, arrested in the city of Turku following Friday’s attack in which eight other people – six of them women – were wounded, arrived in Finland last year, police said. Police shot the suspect in the leg before his arrest.

Police also arrested four other Moroccan men over possible links to him and issued an international arrest warrant for a sixth Moroccan, they said.

Finnish broadcaster MTV, citing an unnamed source, said the main suspect had been denied asylum in Finland, although police said only he had been “part of the asylum process”.

The manager of the Red Cross reception center in Turku, where flags flew at half-mast on Saturday, told Reuters the suspect was an asylum seeker. “I cannot comment on the application’s outcome,” Heimo Nurmi said.

He said police visited the center on Friday and had detained several people. “The arrests were non-violent,” he added.

It was not clear if the attack was in any way linked to the suspect’s asylum application.

The case marks the first suspected terror attack in Finland, where violent crime is relatively rare. Police said they were investigating possible links to Thursday’s deadly van attack in the Spanish city of Barcelona.

“The suspect’s profile is similar to that of several other recent radical Islamist terror attacks that have taken place in Europe,” Director Antti Pelttari from the Finnish Security Intelligence Service told a news conference.

Both of those killed in the Turku attack, and six of the eight who were wounded, were women, the police said. The two who died were Finns, and an Italian and two Swedish citizens were among the injured.

“It seems that the suspect chose women as his targets, because the men who were wounded were injured when they tried to help, or prevent the attacks,” said Crista Granroth from the National Bureau of Investigation.

“The act was cowardly … we have been afraid of this and we have prepared for this. We are not an island anymore, the whole of Europe is affected,” Prime Minister Juha Sipila said.
SCREAMING

The stabbing spree occurred on Friday afternoon in the main market place in Turku, on the southwest coast of the country, 160 kilometers from Helsinki.

“First thing we heard was a young woman, screaming like crazy. I thought it’s just kids having fun … but then people started to move around and I saw a man with a knife in his hand, stabbing a woman,” said Laura Laine, who was sitting in a cafe.

“Then a person ran toward us shouting ‘He has a knife’, and everybody from the terrace ran inside. Next, a woman came in to the cafe. She was crying hysterically, down on her knees, saying someone’s neck has been slashed open.”

Four of the wounded were still in hospital, three of them in intensive care, while the other injured persons would be sent home on Saturday, the hospital said.

Turku’s Iraqi, Syrian and Islamic community condemned the attacks and organized a rally of solidarity in the city’s main square, but decided to cancel it due to security concerns.

“Finns and immigrants, and people from different religions, have had very good relations in Turku… We are shocked, but I don’t see this changing that,” said Abdirahman Mohamed, Chairman of the Islamic community of Turku.

He said the Moroccan suspects were not familiar to him or to the Islamic community in town, which has around 2,000 members.
TENSIONS

An Anti-immigration mood has been on the rise in Finland since it received some 32,500 asylum seekers during the migration crisis in 2015.

Tensions simmered on Saturday Turku as the anti-immigration “Finland First” movement held a rally but it was met by counter-demonstrators brandishing signs saying “No room for racism”.

In Helsinki, about 200 people gathered in the rain to protest against the construction of a mosque and Muslim immigration to Finland in a rally planned by the Finnish far-right group the Finnish Defence League (FDL) before the attack.

Some members of the nationalist Finns party, which was kicked out of the government in June for their new hard-line anti-immigration leadership, blamed the government for what they said was too loose an immigration policy.

“The asylum system is the primary road for illegal immigration, used also by the terrorists. Harmful immigration can be controlled only by reducing Finland’s attractiveness, or by border controls,” said Finns party lawmaker Ville Tavio.

The government has already tightened immigration policies in the past few years, along with other Nordic states.