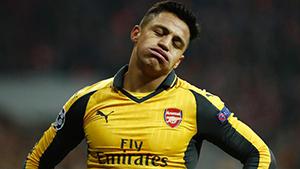 Check out all the latest rumours and gossip from Sunday’s national newspapers.

Manchester City are ready to offer £70m to prise Alexis Sanchez away from Arsenal.

Wayne Rooney is back on Gareth Southgate’s radar and the England manager is set to watch the Everton striker against Man City.

Roman Abramovich is tired of the blame game at Stamford Bridge and has made a personal intervention.

Manchester United, Arsenal and Liverpool are ready for battle for PSG’s Julian Draxler.

Tottenham are confident Danny Rose will stay at Spurs after a heart-to-heart with boss Mauricio Pochettino.
MAIL ON SUNDAY

Chelsea boss Antonio Conte is in a race against time to bolster his squad with Fernando Llorente and Danny Rose wanted.

Atletico Madrid are ready to pay £50m for Diego Costa but Chelsea are now holding out for £60m.

Chelsea youngster Kenedy is set to join Newcastle on loan but Michy Batshuayi is likely to stay.

James Rodriguez’s loan figures have been leaked with the player earning almost £500,000 per month.

Kyle Walker-Peters is set to sign his third new Tottenham contract inside 18 months after impressing in his Premier League debut.

Brighton have launched a £10m bid for Cardiff striker Kenneth Zohore with Tomer Hemed potentially going the other way.
THE SUN ON SUNDAY

Manchester City intend to make Alex Sanchez the highest-paid player in the country on £400,000 per week in a £50m deal.

Diego Costa has turned down a £13m to move on loan to China until November because he wants to return to Atletico Madrid.

Nice star Jean Michael Seri is closing in on a £36.5m move to Barcelona.

Zlatan Ibrahimovic has been pictured on a yacht in Cannes as he continues to recover ahead of a possible Manchester United return.