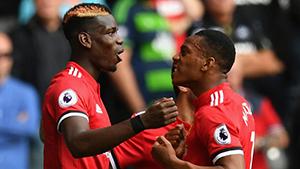 Manchester United continued their sparkling start to the new Premier League season with a 4-0 victory at Swansea but it was a bad day for Arsenal.

United dominated for long periods as they justified 4/11 favouritism but with 10 minutes to go they led by only a single goal – Eric Bailly poking home just before half time after Paul Pogba’s header had hit the underside of the bar.

However, three goals in a four-minute spell late on saw them to a second successive 4-0 victory – they also beat West Ham by the same scoreline last week.

Lukaku already has three league goals this season and is the 5/2 favourite with Sky Bet in the Golden Boot market.

After opening the season in goal-laden fashion, United are now 2/1 for the title, making them second favourites to local rivals City (11/8).

New singing Jese scored the only goal of the game in the Midlands where the Gunners had an Alexandre Lacazette ‘goal’ ruled out by the narrowest of offside decisions and also saw home keeper Jack Butland make a host of saves.

Sadio Mane cut through home frustrations at Anfield to fire Liverpool to a patchy 1-0 win over Crystal Palace, as Jurgen Klopp’s men secured their first victory of the league campaign.

Palace remain winless and pointless from their opening two clashes under new boss Frank de Boer and are into 11/4 for the drop. Liverpool, meanwhile, remains odds-against for a top-four finish at 11/10 having taken four points from a possible six so far.
Charlie Austin’s stoppage-time penalty sealed Southampton’s 3-2 win over 10-man West Ham at St Mary’s.

Saints raced into a two-goal lead, ending their home drought at 556 minutes, as Manolo Gabbiadini and Dusan Tadic found the net.

Marko Arnautovic was red-carded for an elbow on Jack Stephens, while former Saints defender Jose Fonte conceded the penalty that allowed Tadic to put the hosts 2-0 to the good.

Italy striker Gabbiadini ended his own nine-match barren run, with the Saints seemingly coasting after two goals and with West Ham reduced to 10 men.
Javier Hernandez poached two goals to level the scores however, and Saints appeared to be heading for a frustrating draw.

But Pablo Zabaleta fouled Maya Yoshida at the death, and Austin dispatched Saints’ second spot-kick of the match, to seal the spoils.

Southampton odds went virtually the full length of the spectrum during the game – having started at 8/13, Saints were just 1/16 when 2-0 up but 22/1 just prior to their late penalty being awarded.

Having conceded seven goals in two games thus far, picking up no points in the process, West Ham are now 6/1 to go down. They face a third successive away game next Saturday at Newcastle.

Shinji Okazaki and Harry Maguire found the net for Leicester’s 2-0 home win over promoted Brighton, whose wait to get off the Premier League mark continues.

Okazaki handed the hosts the lead after just one minute, before former Hull defender Maguire’s second-half goal wrapped up the win.

Hal Robson-Kanu claimed the winning goal but was later sent off as 10-man West Brom edged home 1-0 at Burnley.

Wales forward Robson-Kanu was dismissed for an elbow on Matt Lowton five minutes from time, and some 14 minutes after putting the visitors into the lead.

Burnley are now 5/4 for the drop and Brighton evens but no side is odds-on in what is a tight market.
Brazilian striker Richarlison struck his first Premier League goal as Watford ground their way past Bournemouth 2-0 at Dean Court.