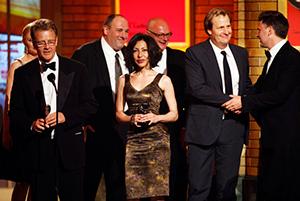 by Greg Evans
Stuart Thompson, the prolific, multiple Tony-winning theatrical producer and manager behind such landmark stage productions as On Golden Pond, Proof and The Book of Mormon, died Thursday of complications from esophageal cancer at his home in New York. He was 62. Thompson’s death was confirmed by his husband Joe Baker.

“In this very small community, Stuart was always a huge figure,” said Scott Rudin and Anne Garefino, producers of The Book of Mormon. “He was a wonderful partner, a beloved colleague, and a profoundly loyal friend. Stuart will be missed by all of us lucky to have known him and worked side by side with him for years.”

Lorne Michaels, Thompson’s producer partner on the new musical Mean Girls, called Thompson “a true gentleman and a joy to work with.”

“He led Tina Fey and I through the process of developing our show,” Michaels said. “We look forward to presenting Mean Girls in both Washington DC and New York to the high standard that Stuart has set for us.”

Thompson began his producing career on Broadway with David Mamet’s The Old Neighborhood in 1997 and went on to co-produce Art, The Chairs, Not About Nightingales, The Play What I Wrote, The Retreat From Moscow, On Golden Pond and the three longest-running Broadway plays of the past 25 years: The Tale of the Allergist’s Wife, Proof (2001 Pulitzer Prize for Drama) and The Curious Incident of the Dog in the Night-Time.

His most recent credits include Sweat (2017 Pulitzer Prize for Drama), John Guare’s Six Degrees of Separation, The Present, King Charles III, No Man’s Land / Waiting for Godot, Cat on a Hot Tin Roof (2013), Death of a Salesman (2012), Jerusalem, The Motherf**ker With the Hat, A View From the Bridge (2010), God of Carnage and Exit the King. He also produced No Man’s Land and King Charles III in London’s West End.

Winner of six Tony Awards, Thompson was born in Sydney and grew up in Adelaide before studying drama at Flinders University and working in arts administration in Australia. He moved to New York in 1980, studying arts administration at New York University and then working at the Kennedy Center with the American National Theatre under the artistic direction of Peter Sellars from 1984-86.

Mentored by producers Robert Whitehead and Lewis Allen, Thompson’s first Broadway assignment as a general manager was on Aaron Sorkin’s A Few Good Men at the Music Box Theatre in 1989, followed by Tru with Robert Morse at the Booth Theatre the same season.

As head of Stuart Thompson Productions (which launched on Broadway with Blood Brothers in 1993), Thompson oversaw the company’s general management activities and more recently produced shows including The Book of Mormon, on which he serves as executive producer for the U.S. companies and a co-producer of the West End and Australian productions.

In 2010 Stuart Thompson was presented with the Robert Whitehead Award for “outstanding achievement in commercial theatre producing.”

Thompson was on the Board of Directors of the Broadway League and Broadway Cares/Equity Fights Aids.

He is survived by his husband Joseph Roland Baker III and brother Graham Thompson, among other family members. A memorial service will be planned. In lieu of flowers, donations can be made to Broadway Cares/Equity Fights AIDS and the Medicare Rights Center.