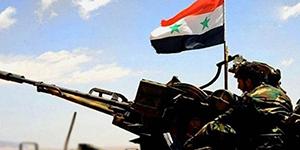 Damascus Countryside, SANA- Army units, in cooperation with the Lebanese National resistance, advanced in Jurod Qara and al-Jarajir in western Qalamoun in Damascus Countryside after inflicting heavy losses upon the ISIS terrorists in personnel and equipment.

SANA reporter in western Qalamoun said Saturday that the army units, in cooperation with the Lebanese National Resistance, established full control over the hills and heights of Harf Wadi Farah, Ra’s Shabet al-Magharah, Qurnet Shmais Dawar Khanjar, Shabet al-Souqi, Wadi Dawar Khanjar, Shmais al-Zamrani, Thanaya al-Hariq height, Wadi Masoud, Wadi Abu Khdair, Shabet Sourour, Qqaber al-Irsali and Khrbet al-Eileh after carrying out intensive operations targeting ISIS terrorists towards the direction of Jurod Qara and al-Jarajir.
The reporter added that the army operations destroyed a number of ISIS fortifications, killing and injuring a number of the terrorists.
He added that the army units and the Lebanese National Resistance also advanced towards al-Arqoub and Rabeit al-Nahhash area in western Qalamoun.
Following the significant advancement of the Army units and the Lebanese National Resistance in the western Qalamoun, groups of ISIS terrorists started to turn themselves in near al-Zamrani crossing which has completely become under a fire control.
Deir Ezzor
Meanwhile, the army units, in cooperation with the Syrian Air Force, conducted intensive strikes against gatherings and positions of the ISIS terrorists in Deir Ezzor province.
SANA’s reporter in Deir Ezzor said that army units clashed with the ISIS terrorists at the axis of al-Maqaber “cemeteries” area along with intensive bombardments by the army air force and artillery against the ISIS positions and fortifications in Hwaijet Sakar, al-Panorama and Hwaijet al-Mura’aia and in the neighborhoods of al-Hamidyia, al-Jubailieh and al-Rushdieh.
The reporter added that a number of the ISIS terrorists were killed in the clashes including Iraqi terrorist Ahmed al-Obaidi, in addition to destroying their arms and equipment.