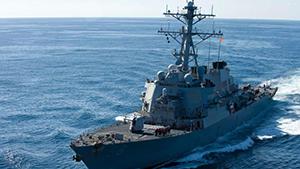 Ten sailors are missing and five injured after the guided-missile destroyer USS John S. McCain collided with a tanker east of Singapore and the Strait of Malacca, the U.S. Navy said late Sunday.

Authorities said four of those injured were medically evacuated by a Singapore navy helicopter. They suffered non-life threatening injuries.

Search and rescue efforts were launched in coordination with local authorities, the Navy said. Initial reports indicated the warship sustained damage to its port side aft, the left rear of the ship.

The collision occured at 6:24 a.m. Japan Standard Time. There is a massive search and rescue underway, involving tug boats out of Singapore and helicopters. An MV-22 Osprey is expected to arrive soon.

President Trump, returning to the White House from his “working vacation,” responded to word of the collision by saying, “that’s too bad.”

The warship is named after John S. McCain, Sr., and John S. McCain, Jr., both Admirals in the U.S. Navy, and the grandfather and father, respectively, of the Arizona senator.

The ship is based at the fleet’s homeport of Yokosuka, Japan. It was commissioned in 1994 and has a crew of 23 officers, 24 chief petty officers and 291 enlisted sailors, according to the Navy’s website.

The Alnic MC, the merchant vessel USS John S. McCain collided with, is a 600-foot oil and chemical tanker.

This crash came days after the top three leaders aboard the USS Fitzgerald were relieved of command. That warship was damaged badly in a collision off the coast of Japan that killed seven sailors in June. One of its compartments flooded in about 90 seconds.

Sen. McCain tweeted Sunday night he and his wife, Cindy, were keeping the sailors in their prayers. He’d recently visited the warship in Vietnam.

This marked the fourth mishap for U.S. Navy ships in the Pacific since February.

Aside from the USS McCain and USS Fitgerald incidents, the Navy crusier USS Antietam ran aground dumping over 1,000 gallons of oil in Tokyo Bay in Februray. In May, another cruiser, USS Lake Champlain, hit a South Korean fishing vessel.

An active-duty Navy officer expressed concern to Fox News over the training of young Navy officers aboard ships.

“It’s not the same level of training you used to get,” the officer said.