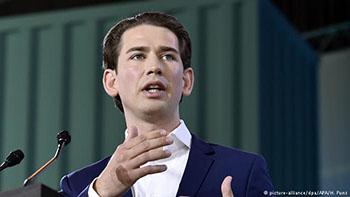 At only 30 years old, Sebastian Kurz is angling not only to become chancellor of Austria, but also to give his country a more powerful stance on the world stage. To that end, he warned against any “meddling” from Turkey.
To call Sebastian Kurz ambitious would be an understatement akin to regarding a hurricane as a light drizzle. In 2013, he managed to become the youngest foreign minister in the world at the age of only 27. And earlier this year, he maneuvered to become chief of one of Austria’s strongest political parties, the conservative Austrian People’s Party (ÖVP).

The ÖVP, which rules in coalition with the left-leaning Social Democrats (SPÖ), promptly called snap elections – to be held a year early, in October 2017. But this time, Austrians who support Kurz will not be voting for the ÖVP but for the “List Sebastian Kurz,” a series of ÖVP-backed candidates led by the foreign minister.
Kurz is aiming not only to become the youngest chancellor in the history of the republic, but to steer his country toward a more conservative migration policy, stop radical Islamist terrorism, “break apart the old system” of politics and shift his nation into a more powerful position in Europe.
In this, as far as his personal profile is concerned, he has already achieved a degree of success. Indeed, he is internationally the most recognizable face in Austrian politics – much more so than Chancellor Christian Kern. There was Kurz, smiling and shaking hands with Iranian President Hassan Rouhani during the early stages of nuclear negotiations in 2014, and his statements in the headlines throughout much of 2015, calling for more effective border control along the EU’s external frontier during the migrant crisis.
Breaking the ‘old system’
In an interview with Germany’s weekly Welt am Sonntag on Sunday, Kurz outlined his vision for the future should he win the chancellor’s seat in October, including ending the “chaos” of NGOs getting involved in Europe’s migration wave and keeping Turkish President Recep Tayyip Erdogan from “meddling” in European elections.
“I have the strength of will to break apart the old system,” he told the newspaper – starting with how the EU handles the millions of refugees fleeing conflict and poverty to European shores.
“Some NGOs presumably want to do something good [by intercepting illegal migrant boats in the Mediterranean],” said Kurz, “but in the end they don’t produce any good results, just chaos.”
To stop the chaos, Kurz wants to end “economic migration” to the EU, which he makes clear is different from those fleeing war and violence in countries like Syria, by working with the Libya government and closing the so-called “Balkan route” that migrants used to travel from Greece to western Europe. He swiftly deflected comments made by Berlin that Libya’s migrant centers were comparable to “concentration camps.”
Reacting to being called “hard-hearted,” by his interviewer, Kurz bristles at the accusation, insisting: “I want to stop illegal, uncontrolled migration. At the same time, I fully support providing aid to developing countries on the ground, as well as creating paths for legal immigration to Europe.”
‘We will not accept meddling of any kind’
The last point Kurz was at pains to make in the interview is that neither Germany nor Austria will tolerate any foreign meddling in their upcoming elections.
On Friday, Turkish President Erdogan issued a message to Germany’s considerable Turkish community not to vote for any of the country’s major parties during the country’s federal vote on September 24.
Amidst an escalating row over Turkey’s authoritarian crackdown on opposition voices in the media – which has led to several German nationals being jailed by Ankara – Erdogan said he was “calling on all his countrymen not to make the mistake” of voting for Chancellor Angela Merkel.
Merkel slams Erdogan over German election ‘meddling’
Later that day, Ankara’s outspoken Mayor Melih Gokcek called Germany’s Green party leader Cem Özdemir, himself the son of Turkish immigrants, a traitor and an “Armenian servant.”
Clear words
Kurz had a clear warning for Erdogan: Keep out of our elections.
“If Erdogan or his ministers are planning anything similar for Austria’s upcoming vote, I want to make it absolutely clear that we will not accept meddling of any kind.”
“Turkey is an important neighbor, with whom, when it is necessary, we must cooperate,” he said, adding – thus eschewing any notion of EU membership for Ankara – “with respect to democracy and human rights.”