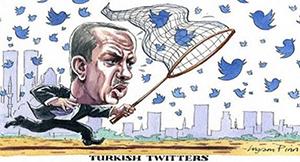 By TM
Despite reactions from Berlin “not to interfere in internal affairs,” Turkish President Recep Tayyip Erdoğan on Sunday reiterated his call on Turks living in Germany not to vote for parties treating Turkey as an enemy, Cumhuriyet reported.

“They closed the doors of Germany to the Turkish president. [Chancellor Angela] Merkel is also one of them. They are not connected to democracy. Now their foreign minister [German Foreign Minister Sigmar Gabriel] snipes at me. Who are you? I am not your interlocutor,” said Erdoğan during a ruling Justice and Development Party (AKP) meeting in İstanbul, adding:

“They send messages to our country; why should I not send messages to theirs. Never vote for parties that are the enemy of Turkey. Go with Turkey-friendly parties. Don’t worry if the parties are small. Let’s make them bigger.”

“Now they have a foreign minister who does not know his limits. Who are you to talk to the president of Turkey? Talk to the foreign minister of Turkey. Know your limits. He is trying to teach us a lesson. What is your background in politics? How old are you?” Erdoğan said, speaking at his AKP meeting in Denizli province on Saturday.

German Foreign Minister Gabriel on Friday reacted to Erdoğan’s calls on Turks living in Germany not to vote for parties of the ruling coalition and called it “an unprecedented attack on German sovereignty.”

Speaking during a party rally in Herford on Friday, German Chancellor Merkel said she would not tolerate any interference in the German elections.

“All German citizens, including those with a Turkish background, have the freedom to vote. We will not show any toleration for any interference,” she said.

“Erdoğan has lost every measure. All the more, we are on the side of all those who are fighting for a free and democratic Turkey,” he tweeted on Friday.

Following a series of disputes between the two NATO allies due to Turkey’s crackdown in the wake of a botched coup attempt last summer, Merkel recently said a customs union agreement between Turkey and the European Union should not be expanded unless the tension eased with Turkey.