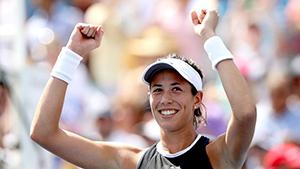 Garbine Muguruza won the Western & Southern Open title with a thumping win over Simona Halep, who missed the chance to become world number one.

The Wimbledon champion, seeded four, claimed her second title of the season with surprising ease, as she swept aside the Romanian 6-1 6-0 in Cincinnati.

Halep knew victory would see her move to the top of the ranking above Karolina Pliskova, who was beaten by Muguruza in the semi-finals, but this defeat means she’ll remain five points behind the Czech on Monday.

Told the WTA website: “I think today was my best performance of the tournament, because I felt like I played 20 hours in that court, you know. I had very long matches. It was just there. I think I did few little mistakes and my shots were very [well] placed and I think I was doing almost everything right there.

“Since the first ball, honestly, I knew there was going to be a lot of long rallies, and she’s a very solid player and, you know, very tough, as well. I was ready for it. I was looking to play my game, to be aggressive since the first moment.”

The Spaniard was in total command during the 56-minute contest – as the scoreline emphatically suggests – although a key moment came in a marathon seven-deuce game in the second set when Halep failed to convert two break points as she desperately sought a way back into the match.

“I felt there was a key game in the second set, the 3-0 game, but I felt — I felt very comfortable there, playing against Simona, and also my level was very high,” added Muguruza. “I felt like especially in the second set I could raise it a little bit more and close the match.”

Of Halep, she added: “I was thinking about [Halep reaching No.1]. I’m like, ‘Oh, I wish I was in her situation.’ It must be difficult, but I wanted the title, as well. Now you’re telling me I’m going to be No.3, but I didn’t know that. I feel like a lot of people are asking me about No. 1, stuff like that. All I want is to win the tournaments. That’s what…motivates me always.

“[The ranking] is going to be a consequence. If I keep playing like this, sooner or later I guess I will be, I don’t know. I hope so – but, no, it’s not here yet like that.”