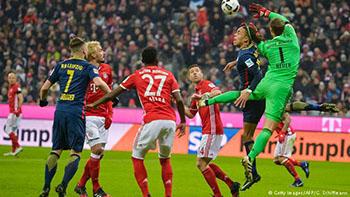 The German Cup second-round draw threw up some welcome surprises, including four Bundesliga match-ups.
Bayern Munich have the most eagerly anticipated draw of the second round, as they must travel to RB Leipzig. With the pair finishing first and second respectively in the Bundesliga last season, as well as playing out a thrilling 5-4 on the final day, this draw will have fans excited.

The other all-Bundesliga clashes include Hertha Berlin vs. Cologne, Werder Bremen facing the side they played on the opening day of the new league season, Hoffenheim, and newly-promoted Hannover in Wolfsburg.
Borussia Dortmund travel to third-division outfit Magdeburg, the club and city of Marcel Schmelzer’s youth.
Fortuna Düsseldorf will host Borussia Mönchengladbach in a regional rivalry, Leverkusen are at home against Jens Keller’s Union Berlin and Dynamo Dresden will visit the Black Forest to play Freiburg.
The games will be played on October 24 and 25.