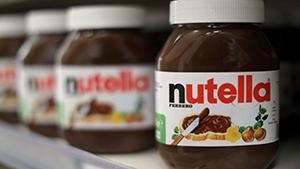 Martin Ahlich, a police spokesperson, said the refrigerated truck container was stolen in the Hesse town of Neustadt on either Aug. 12 or Aug. 13. Police have not released a motive for the robbery.
“It’s not even clear if they were after the sweets or after the trailer — at this point we don’t know what their motive was,” Ahlich told CBS.
The chocolate was worth an estimated $59,000 to $82,000.
Kinder eggs were also stolen from the truck in Germany, police said. (Reuters)
Neustadt Police urged citizens to alert authorities if they are offered the treats.
“Anyone offered large quantities of chocolate via unconventional channels should report it to the police immediately,” the Neustadt police said in a statement.
This is not the first time Germany has been affected by chocolate thieves. Last week in the German state of Schleswig-Holstein, police said they were looking for a person who allegedly left 53 grams of stolen chocolate in the town of Bad Oldesloe, according to The Telegraph.
The Associated Press contributed to this report.