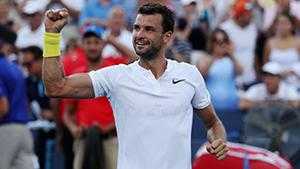 Grigor Dimitrov won his maiden Masters 1000 title with a straight sets victory over Nick Kyrgios in the Western & Southern Open in Cincinnati.

The 26-year-old, who is the world number 11, won 6-3 7-5 to claim his third title of the season following victories in Brisbane and Sofia.

Both were playing in their first Masters final and they played some impressive tennis, including a 23-shot rally in the fifth game.

Dimitrov broke serve in the next game by crashing a superb forehand down the line and he served out the set comfortably.

A tight second set swung the way of the Bulgarian in the 11th game when he broke serve again when Kyrgios over-hit a forehand past the baseline.

He was crowned champion on his second match point when the Australian hit a return into the net.

“I love playing here,” Dimitrov said on the ATP website. “This tournament has actually been one of my favourite tournaments.”