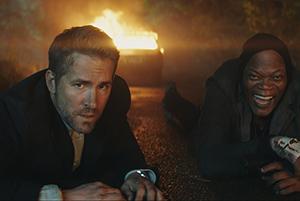 Jennifer Calfas
The R-rated action comedy Hitman’s Bodyguard fired through its opening weekend with a $21.6 million debut, nabbing the top slot at the box office.

While Hitman’s Bodyguard received mixed reviews by critics, its star power likely drew audiences this weekend — which was a slow one for the summer without any blockbuster competition in theaters. The film follows one of the world’s top bodyguards (Reynolds) as he is forced to protect his enemy, a notorious hitman (Jackson).

The film received a lackluster 38% on Rotten Tomatoes — but audiences appeared to enjoy it more than critics, giving it a 75% rating on the site.

The latest in the Conjuring world from Warner Bros., Annabelle’s box office earnings this week dropped 56% from its debut weekend of $35 million.

Christopher Nolan’s Dunkirk and Open road’s The Nut Job 2: Nutty By Nature, filled out the top five, earning $6.7 million and $5.1 million over the weekend, respectively.