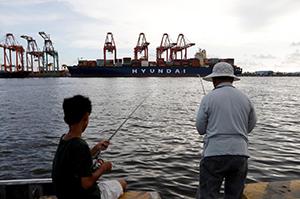 SEOUL (Reuters) – South Korean shipper Hyundai Merchant Marine Co Ltd (HMM) (011200.KS) is in talks with BlackRock Inc (BLK.N) about a potential investment but details have yet to be discussed, a HMM spokesman said on Monday.

BlackRock is in talks with HMM to invest up to 1 trillion won ($880 million) in the nation’s largest shipper, the Korea Economic Daily reported on Monday, citing unidentified investment banking and shipping industry sources.

A BlackRock spokeswoman could not be immediately reached for comment.

The government of export-driven South Korea has injected 1.5 trillion won in HMM, including via a rights issue, to bolster the firm since last year, when the country’s former largest shipper, Hanjin Shipping, applied for court receivership.

But HMM, the world’s 14th largest shipper, still needs support to survive in an industry where mergers and acquisitions between large competitors and the need to join alliances with powerful players increasingly make it difficult for shippers of HMM’s size.

HMM late last year said to become a global shipping company, it needed over 10 trillion won in funds, including 5.6 trillion won for new container ships and 3.3 trillion won to buy containers, citing data from consultancy A.T. Kearney, some of which it said it can source via shipping finance.

HMM shares were up 1.2 percent in morning trade, compared with a 0.2 percent fall for the wider market .KS11.