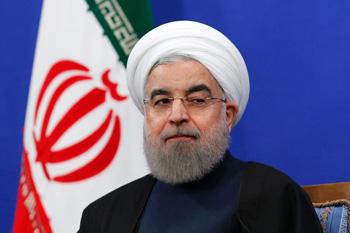 Iranian President Hassan Rouhani won lawmakers’ approval for all but one of his new cabinet, in an overwhelming show of support for an agenda criticized by some conservatives at home and threatened by an increasingly confrontational U.S.

Parliament on Sunday voted to reappoint Oil Minister Bijan Namdar Zanganeh and Foreign Minister Mohammad Javad Zarif, top Rouhani allies during his first term, as well as 14 other ministers. The only candidate to lose a vote of confidence was Energy Ministry nominee Habibollah Bitaraf.

Addressing the assembly before votes were held, Rouhani pointed to the 2015 nuclear deal that opened the economy for business and said Iran can achieve more by being united. “We need to move forward. This is not the time to have proponents and opponents, we all need to help and act,” he said.

The 68-year-old cleric won another four years as president in May on a pledge to press ahead with his policy of easing Iran’s political isolation to achieve further sanctions relief for the economy. Sworn in for a second term on Aug. 5, Rouhani will depend on moderate factions that increased their representation in parliament in elections last year.

His policy thrust has run up against President Donald Trump’s opposition to the pact. Trump has threatened to withdraw from the 2015 agreement that curbed Iran’s nuclear program in exchange for sanctions relief, and since the start of his term, the U.S. has applied new sanctions against Iran’s ballistic missile program and its elite Revolutionary Guards.
Zanganeh Attacks

Rouhani has also been challenged domestically by conservatives who say the nuclear deal has failed to deliver economic benefits for the majority of Iranians and who point to the U.S. as an untrustworthy partner even after the agreement.
Get the latest on global politics in your inbox, every day.
Get our newsletter daily.

Amid the challenges, lawmakers have shown this “parliament has confidence in the president and in his ministerial choices,” said Adnan Tabatabai, chief executive officer of the Center for Applied Research in Partnership With the Orient, a think-tank based in Bonn, Germany. “We can expect smoother interactions between the parliament and the government” as Rouhani tries “to push through” legislation, he said.

Zanganeh had been a target of conservative attacks over a July agreement with Total SA, signed under a new energy investment model that aims to offer more attractive terms to international companies. Zarif, who headed the team of nuclear negotiators, has been accused by hardliners of being too friendly toward the U.S. and of negotiating a bad deal.

“The U.S. doesn’t need your help,” Rouhani said in a swipe at his opponents. “Come and help the Iranian nation and your people instead.”

Lawmakers criticized Bitaraf for failing to put forward an effective plan to tackle Iran’s water shortage in his address to the assembly. He was supported by only 133 of the 288 legislators present.

The president now needs to appoint a caretaker for the Energy Ministry and has three months to nominate a replacement. He is yet to propose a candidate for science minister.

— With assistance by Nour Al Ali