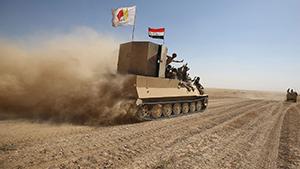 Iraqi forces launched an offensive Sunday to retake from Islamic State the town of Tal Afar, the largest stronghold remaining in the country under the control of the militant group.

The battle, which was announced by Iraqi Prime Minister Haider al-Abadi, comes a month after the U.S.-backed security forces declared the city of Mosul liberated from Islamic State.

“Mosul was a decisive victory for the Iraqi Security Forces, but it did not mark the end of ISIS in Iraq, or its worldwide threat,” U.S. Army Lieutenant General Stephen Townsend, commander of U.S. and coalition forces in Iraq and Syria, said on Sunday using an acronym for the group. The security forces’ operation “is another important fight that must be won to ensure the country and its citizens are finally free of ISIS,” he said.

The coalition conducted more than 60 strikes against Islamic State targets in and around Tal Afar during the last week, focusing on weapons caches, car bomb factories and other sites, said U.S. Army Colonel Ryan Dillon, spokesman for the coalition.

Tal Afar, which has between 10,000 and 50,000 civilians, is viewed by the Iraqi government as having strategic importance because of its proximity to the border with Syria, Dillon told reporters at a Pentagon briefing on Aug. 16.

“The Iraqi Security Forces determined that this was where they want to defeat ISIS next,” Dillon said during the briefing.