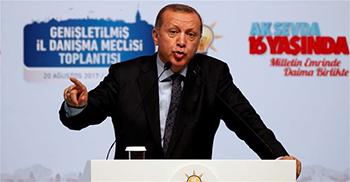 It is crucial to raise the ruling Justice and Development Party’s (AKP) votes in Istanbul above Turkey’s average to win the upcoming elections, President Recep Tayyip Erdoğan has said, urging his party to double efforts when campaigning.

“It is a must for us to raise our votes in Istanbul above Turkey’s average with our campaigning works until the 2019 elections,” Erdoğan told AKP Istanbul provincial heads on Aug. 20.

“In the referendum, we received 48.65 percent of the votes. We do not want to see Istanbul like that. The moment that Istanbul falls behind the average, we will be very disappointed,” he said.

The constitutional amendment change that was approved in the April 16 referendum will be put into effect after the 2019 presidential and parliamentary elections. In the presidential elections, the candidate has to receive 51 percent of the votes in order to be elected as president.

Erdoğan’s words come amid the AKP’s preparations for campaigns for the upcoming presidential and parliamentary elections.

The party is set to undergo a major change after Erdoğan demanded a “renewal operation” ahead of the elections.

“We will never allow the weaknesses of old political parties to affect the AKP,” he said.

“We need leaders who are fair, and who will not allow any corruption. The municipalities will not be drifted away with corruption. We have to be determined about that,” he added.

He reiterated that a reshuffle within the party “should not be considered as dismissals,” but should rather be regarded as a “renewal.”

“We are determined to continue the service, which is a relay race, with our new friends in Istanbul by strengthening it,” he said.

Erdoğan also slammed some columnists and social media figures for “speaking on my behalf.”

“In the debates that are usually triggered by some social media accounts or by some columnists, some are responding strongly on my behalf. I am expressing from here loud and clear, if I have an opinion, suggestion or a feeling that I want to share with my nation or my party, the ways are clear. I don’t need anybody to react on behalf of me. I would react if necessary,” Erdoğan said.

He said only presidential, government and party spokespersons’ declarations should be taken into an account.

“Apart from me and my spokesperson, none of the statements have any relation to me or my party,” he said.