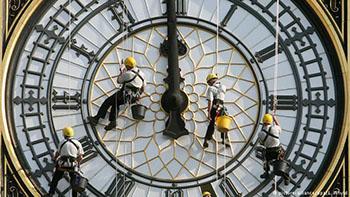 The Big Ben bell in the UK parliament’s clock tower will cease its regular bongs at noon. The cherished symbol will fall silent for most of the next four years while the tower is renovated, to the ire of some lawmakers.
The hammer that has struck the massive bell every hour for most of the past 157 years will take a break until 2021. The tower’s bells will be locked and disconnected from the clock while the structure undergoes extensive renovations.

“This essential program of works will safeguard the clock on a long term basis, as well as protecting and preserving its home, the Elizabeth Tower,” said Steve Jaggs, whose official title is “Keeper of the Great Clock.”
A group of British MPs planned to gather outside parliament for Big Ben’s last chimes before the repair work. Labour MP Stephen Pound said that around 20 “traditionalists” would stand before the tower “with heads bowed but with hope in our hearts.” This, however, elicited an amused reaction from a less “traditional” colleague of Pound’s, Labour’s Jess Phillips.
Inside Europe: Can the Brits survive without Big Ben?
Big Ben, which chimes at 118 decibels, is being silenced to protect the hearing of repair workers. Its bongs will still sound for important events such as New Year’s Eve celebrations.
But the shutdown, coinciding with Britain’s impending departure from the European Union, leaves the country without one of its most renowned symbols during a time of national uncertainty. That’s sparked a political debate, with Prime Minister Teresa May among those to chime in.
“Of course we want to ensure people’s safety at work, but it can’t be right for Big Ben to be silent for the next four years,” she told reporters earlier this month.
A House of Commons commission has said it would consider the length of time the bells will fall silent, taking efficiency as well as health and safety into account. The Commons said starting and stopping the bells took about half a day, so it would not be practical to do it often. Some pro-Brexit MPs from May’s Conservative Party have called for the bell to be back in action on March 29, 2019, when Brexit takes effect.
London landmark
The Palace of Westminster on the bank of the River Thames, home to parliament, is a world heritage site and major tourist attraction.
Member of the House of Lords and author of political thriller “House of Cards,” Michael Dobbs told DW’s Inside Europe that Big Ben was an enduring symbol of Britain.
“It’s a great source of comfort there, a sense of security. It’s defied so many things; fire, frost, even packs of starlings.”
Big Ben weighs 13.5 British tons (15.1 US tons, 13.7 metric tons). The Elizabeth Tower which houses it is 96 meters (315 feet) tall and is believed to be the most photographed building in the United Kingdom.
The major renovation project will include dismantling the elaborate machinery that enables the clock to accurately keep time – each cog will be examined and refurbished. The clock’s four dials will also be cleaned and repaired, their cast iron framework renewed and the hands removed and refurbished.
The clock has been silenced for repairs in the past but this will be the longest bell-free period since the structure was completed in 1859. One working clock face will remain visible, telling the time silently, but it will be powered by a modern electric motor until the original clockwork mechanism is restored. All the other bells which chime every 15 minutes will be silent as well during the works that are scheduled for completion in 2021 at an estimated cost of 29 million pounds ($37.7 million, 31.9 million euros).
se, bik/msh (Reuters, AP, AFP)