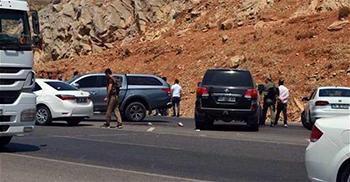 Turkish security forces on Aug. 19 killed an Islamic State of Iraq and the Levant (ISIL) member and detained four others believed to have been planning a bomb attack, local authorities have said.

Turkish forces in the southern province of Hatay, bordering Syria, stopped a vehicle carrying five ISIL suspects after receiving intelligence that “they had come to our country to carry out a bomb attack,” the Hatay Governor’s Office said.

The incident occurred at 12:15 p.m. in Hatay’s Kırıkhan district, according to the statement.

Police and intelligence units launched a joint operation in the İskenderun-Antakya highway where they later stopped the vehicle.

Four of the suspects surrendered but security forces opened fire on the fifth individual after he failed to heed warnings to surrender and attempted to attack them, it said.

Identified as a Syrian national, the suspect later died in the Mustafa Kemal University’s research and training hospital despite efforts to save his life, the statement added.

Three of the suspects were of Turkish origin while the other two were of Syrian origin. Investigations into the incident have been ongoing.

The road was briefly blocked to traffic during the operation.

Bomb disposal experts also conducted searches inside the vehicle but did not find any explosive material.

Turkish Prime Minister Binali Yıldırım confirmed reports of the operation against ISIL suspects at a press conference in Ankara Esenboğa Airport before leaving for Singapore on Aug. 20.

“This morning, five ISIL members were neutralized while attempting to cross the border illegally. It is under control,” he said, adding that Turkey was under constant threat of terrorism due to its neighbors in the region.

Turkish authorities use the word “neutralized” to refer to militants who are killed, wounded or captured.

Meanwhile, two foreign citizens also suspected of being members of ISIL were detained on Aug. 17 in Istanbul, the state-run Anadolu Agency reported on Aug. 19.

They were accused of planning an attack after police seized an automatic rifle, two pistols and ammunition in a raid against them. The pair had entered Turkey illegally, it added, without specifying their nationalities.

Turkey was hit by a series of attacks in 2016 that left hundreds dead in the bloodiest year of terror strikes in its history.

In one of the bloodiest strikes, an ISIL gunman opened fire on the Reina nightclub in Istanbul just 75 minutes into New Year’s Day in 2017, killing 39 people, mainly foreigners.

A 24-year-old Turkish police officer was stabbed to death in Istanbul on Aug. 13 by an ISIL suspect who had been arrested on suspicions he was planning a suicide attack.