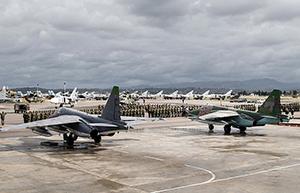 MOSCOW, August 21. /TASS/. Russia’s air force task group in Syria delivered strikes destroying a large convoy of terrorists’ vehicles, which headed to the Syrian city of Deir ez-Zor, the Russian Defense Ministry announced on Monday.
“The Russian military aviation eliminated another large convoy of militants from the Islamic State (a terrorist organization outlawed in Russia), as they were heading to Deir ez-Sor, where international terrorists are trying to re-group and set up their last stronghold in Syria,” according to the ministry.
“Bombers and military aviation from the Russian Aerospace Forces destroyed over 20 off-road vehicles equipped with large-caliber weapons and grenade launches, as well as armored vehicles, including tanks, and heavy-load trucks carrying ammunition,” the ministry said. “Over 200 militants were also eliminated.”
The Russian Defense Ministry added that throughout August militants had been trying to focus on the province of Deir ez-Zor, while the Russian air forces and Syrian government troops were ousting them from the south of Raqqa province and the west of Homs province.
“The defeat of the Islamic State in the region of Deir ez-Zor will be a strategic defeat of the international terrorist group in Syria,” according to the ministry.