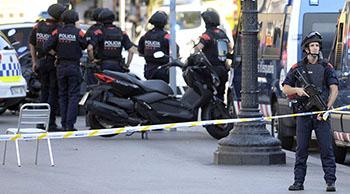 European stock markets plunged on Friday following deadly terror attacks in Spain. Fourteen people were killed and over 100 injured after a terrorist drove a van into crowds in Barcelona.
The pan-European STOXX 600 was down 0.29 percent, rebounding from a 0.9 percent loss. Tourism and airline industry stocks took the hardest hit.

Easyjet, Ryanair, British Airways owner IAG, and Lufthansa were all in the red, down from 1.9 to 2.7 percent.
Spanish airport company AENA was down 1.52 percent, recovering from a two percent drop.
“As we’ve seen over the last couple of years in Europe, these kinds of atrocities affect tourism and will hit airline earnings,” said Neil Wilson, an analyst at ETX Capital, as quoted by Reuters.
Spanish stocks are leading the selloff in Europe with the IBEX in Madrid down one percent. The British FTSE100 was down 0.98 percent, Germany’s DAX dropped 0.58 percent, and French CAC40 slid 1.06 percent.
The US stock market closed with big losses on Thursday but is set to open in the green.
S&P futures are up 0.05 percent, Nasdaq futures 0.25 percent, and the Dow was up 0.01 percent.
“The Barcelona attack is just one catalyst for the selling, with issues in Washington also causing investors huge concern,” said Rebecca O’Keeffe, head of investment at Interactive Investor told CNBC.
Investors are hesitant whether US President Donal Trump is able to realize his ambitious economic goals, such as tax cuts and infrastructure spending.
As usual after such events, gold surged. Bullion was up 0.65 percent, trading at $1,300 per troy ounce.
Cryptocurrencies, which are now considered by some experts as another safe haven, also rose on Friday.
Bitcoin is up over two percent, trading at $4,407 per token, while its main rival ethereum is over six percent higher.