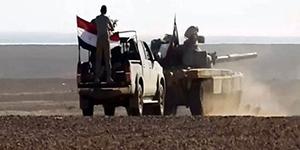 Provinces, SANA- Army and Armed Forces units, in
cooperation with the supporting forces, reestablished full control over the villages of al-Dkaileh al-Shamaliyeh, al-Dkaileh al- Janoubiyeh and Um Hartain and a group of strategic hills to the south of Um Hartain village in the eastern countryside of Hama.

A military source told SANA that the army operations in these areas destroyed machineguns -equipped pickup tricks and killed 10 terrorists from ISIS.

Meanwhile, the army units, in cooperation with Lebanese resistance, advanced in Jurod Qalamoun in Damascus Countryside.

Units of army established control over Hmeimeh town in Homs eastern countryside and killed a number of ISIS terrorists, then the engineering units dismantled mines and explosive devices planted by ISIS in the town.

Army and Armed Forces units killed 20 ISIS terrorists to the east of al- Sukhneh and in al-Mshairfeh al-Janoubiyeh and Abu Qatour in eastern countryside of Homs and destroying a number of their armored vehicles and cars.

A military source told SANA on Sunday that the army units destroyed ISIS hideouts after carrying out intensive strikes against them in the surroundings of the Cemeteries, Alloush Hill and al-Howeiqa neighborhood in Deir Ezzor, killing 20 ISIS terrorists at least.

The source added that Syrian and Russian Air Forces carried out concentrated airstrikes on ISIS sites and fortifications in Wadi al-Tharda, Taliet Aloush, Sarit Jneid and the area surrounding al-Maqabir (cemeteries) in the area surrounding Deir Ezzor city, killing a number of ISIS terrorists and destroying their weapons, ammunition and armored vehicles.

In the same context, SANA’s reporter in Deir Ezzor said that army units carried out concentrated operations against ISIS positions and movements in the Cemeteries area, Thardah, the Panorama, and in the surroundings of Regiment 137.

The reported added that the Army operations left a number of ISIS terrorists dead or injured in addition to destroying their positions, fortifications, and amounts of weapons and ammunition.

Meanwhile, local sources said that a number of ISIS terrorist organization’s members have fled the province, among them “Abu Obadah al-Shami,” who was the head of the so-called “office of the Caliphate youth,” along with his family.

The sources added that the ISIS terrorists killed 4 civilians and injured others on al- Kasra-Abu Khasab road, 70 km northwest of Deir Ezzor city, in addition to shooting dead 5 others while they were trying to escape from al-Qasabi village in the western countryside across the Euphrates River.

Two days ago, the ISIS terrorists executed terrorists Abu Asbat al-Sudani, emir of the so -called repentance closed institutes in the city and its surroundings, while a number of ISIS leaders fled, including a terrorist nicknamed “Abu al-Hawraa al-Tunisi.”

Army and Armed Forces units operating in eastern countryside of Sweida thwarted terrorist groups’ attempt to attack a number of
military border posts, inflicting heavy losses upon them in personnel and equipment.