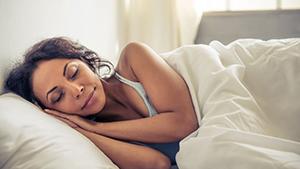 The Daily Meal
This is the diet that has absolutely nothing to do with eating — but that’s proven to be way more effective in getting you healthy than any other regimen.

According to a study published in The Lancet, sleep is crucial for metabolic function and hormone stability. Hormones and metabolism play a pivotal role in health, affecting everything from diabetes prevention to heart disease risk.
When participants’ sleep was restricted, they experienced an increase in stress hormones and a decrease in the speed of their metabolism.
Another study found that a lack of sleep contributed to a sharp decrease in leptin — the hormone responsible for regulating fat storage. They also witnessed an increase in ghrelin — a hormone that increases appetite.
If you’re not sleeping enough, you’re obviously going to be tired. Your body is going to get stressed and start sending signals to your body to put on weight. The weight, from your body’s perspective, is there as a reservoir of energy. When you feel tired, it’s suspicious that it might need it.
You don’t have to cut the carbs off your hamburger, start drinking “wellness shots” that taste more like grass than juice, or choke down harsh sips of apple cider vinegar to foster a better relationship with your body.
All you have to do is simple: Sleep.
Not before you eat, not excessively, not five times a day, or whatever other wild ideas are ricocheting through your mind.
Just sleep enough. And sleep well.
Of course, this is easier said than done. That’s where the concept of the diet comes in. Diets are often seen as temporary — a short-term set of rules to carry you through a healthy change or two that hopefully sticks after it’s over, when the clock strikes midnight and boom you can eat pasta again.
With food, diets don’t work. They’re often extreme, restrictive, and leave you drooling desirously over a cupcake you never even blinked at before. That doesn’t happen on a sleep diet. You don’t crave consciousness when you start to get enough sleep. If you’re somehow taking it to the extreme (i.e., getting too much sleep) you’ll just wake up. It’s the equivalent of accidentally eating a doughnut if you’ve gone too far and prohibited dessert.
The sleep diet, if done effectively, works. It’s just not easy. Here’s how to do it:
1. Set a time frame for the diet. One week is a good place to start.
2. Set your own rules. How much sleep do you want to get each night? Figure out the bedtime you would need to follow to accomplish the desired number of hours. Write it down.
3. For the time frame of your diet, stick to your bedtime. That’s the only rule to which this diet adheres. It’s easy to remember, but surprisingly difficult to do.
But before you say, “No, I can’t do that,” think about it for a second. Is it any harder than a typical diet? With those, you often have to eliminate entire sectors of your life. Happy hour with your coworkers? No drinking. Birthday cake with the kids for their birthday? Not for you!
Why do we perceive sleep as more extreme than those other restrictions — restrictions that aren’t even all that good for you?
Sleep, on the other hand, is great for you. With a few extra hours of rest under your belt, you’re likely to gravitate naturally towards your healthiest weight — and feel much better, too.
This article originally appeared on The Daily Meal.