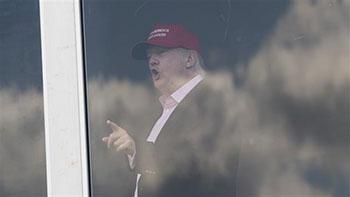 The administration of US President Donald Trump has disbanded a federal panel aimed at raising awareness about the government’s activities on climate change.
Comprised of government and officials as well as academics and industry leaders, the 15-member Advisory Committee for Sustained National Climate Assessment was tasked with guiding the public and private-sector officials in understanding the Trump administration’s climate reports.

The group’s charter expired Sunday, two years after being established by the National Oceanic and Atmospheric Administration (NOAA). The acting NOAA chief had informed the committee’s chair that it was not going to be renewed, the Washington Post reported.
After the establishment of the Global Change Research Act in 1990, Washington launched a Global Change Research Program that has been producing a National Climate Assessment every four years. The next report is scheduled for the next year.
Confirming the panel’s disbandment, NOAA communications director Julie Roberts said the decision would not affect the Fourth National Climate Assessment, which she said “remains a key priority for the Department (of Commerce) and NOAA.”
According to the New York Times, the report will once again prove that, despite Trump’s refusal to accept climate change as a real issue, the problem is only growing bigger in the US.
“Many lines of evidence demonstrate that human activities, especially emissions of greenhouse (heat-trapping) gases, are primarily responsible for recent observed climate change,” scientists from 13 federal agencies wrote in the report.
The Republican president recently signed an executive order on infrastructure, which eliminated regulations by former President Barack Obama that required the federal government to factor in climate change and rising sea-levels when building.
Trump, who has called climate change a Chinese “hoax,” pulled the US out of the Paris Agreement on climate change in June, a year after Obama signed it.
Trump said during the election campaign that he would “cancel” the accord in his first 100 days as president in order to save the declining coal industry in the US.