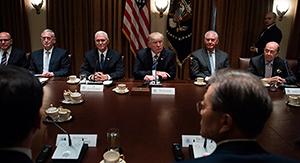 The sixteen national security strategies issued by presidents Ronald Reagan to Barack Obama reaffirmed U.S. leadership of a liberal international order, even as they acknowledged it enabled the rise of others and eroded U.S. economic dominance. President Donald Trump may decide that is no longer tenable. His forthcoming national security strategy will be closely scrutinized to understand what “America First” means for the U.S. role in the world and whether it represents a shift toward a narrower, neo-mercantile approach.
A Potential Historic Turning Point
• Historically, discussion of mercantilism has resurfaced in moments of upheaval, when accepted ideas on the relationship between politics and economics are thrown into question.
• In response to a financial crisis and structural shifts in the global economy, Obama pursued a strategic rebalance that sought to wind down major ground wars, increase investments in long-term U.S. competitiveness in an open-trading system, and strengthen U.S. partnerships in emerging centers of global economic growth.
• Like previous presidents, Obama rejected nationalism and protectionism, concluding that the absolute benefits from supporting allies and globalization far outweighed the costs and risks.
• The Trump administration has sent mixed messages about its strategy—at times signaling a neo-mercantile, transactional vision for the United States’ alliances and role.
Key Issues to Note in Trump’s Strategy
Does it acknowledge the limits of protectionism? Previous administrations did not do enough to assist Americans losing out from globalization. Protectionist measures could aid certain struggling industries, but if reciprocated, they could have significant negative consequences, especially for U.S. businesses and consumers benefiting from an open, global economy. Further, trade is not the only culprit. Myriad factors—from technology to underinvestment in education and job training—have contributed to job losses and stagnant wages.
Does it view trade in both strategic and economic terms? Trade has been a central pillar in U.S. strategy—not only to buttress economic growth but also to build partnerships with states with shared interests and values. If the alliance system weakens due to heightened friction over trade, it could undermine U.S. political and security interests.
How does it propose to avoid the increased threat of war that characterized the mercantile period? U.S. administrations since 1945 have recognized the value of international institutions and conventions that provide a framework for nations to compete, cooperate, and resolve differences peacefully. Absent U.S. leadership and support, this framework will weaken and the risk of interstate conflict will rise.
Introduction