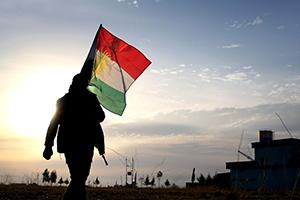 By Firat Kozok , Onur Ant , and Khalid Al Ansary
Turkey sees a real risk that Iraqi Kurds will press ahead with an independence referendum, according to an adviser to the president, a move that would defy almost unanimous opposition among neighboring states and surprise the many observers who foresee a deal with Baghdad emerging.

The semi-autonomous area in the north of Iraq might create “de facto” sovereignty by holding the vote as planned on Sept. 25, Reha Denemec, who advises Recep Tayyip Erodgan on issues including foreign policy, said in a phone interview Monday. That would exacerbate the already “abnormal” conditions in the region, he said, adding that only Israel among local powers supports Kurdish independence.
Kurdish leaders have for years flirted with a complete break from Baghdad’s rule, renewing the calls after Islamic State routed the Iraqi army in its march to the border of the oil-rich region in 2014. The plan for a plebiscite — to be followed by another for a new parliament and president on Nov. 6. — has been condemned by Iraq’s government, the U.S., Iran and Turkey, which worries sovereignty would encourage its own Kurdish insurgents.
All have urged Kurdish leader Massoud Barzani to seek an agreement with Iraqi Prime Minister Haider al-Abadi that would keep Iraq intact. A delegation of Kurdish politicians has in recent days been in the Iraqi capital to discuss key issues, including the share of federal income handed to the Kurdistan Regional Government in Erbil and the distribution of oil revenues. They also met the ambassadors of the U.S., Britain, Russia, and Iran.
Close Ties
The central government’s “intention” is to reach a deal and the latest negotiations were held in a “friendly atmosphere,” Abadi’s spokesman, Saad Al-Hadithi, said by phone. Holding a referendum would be “unconstitutional” and wouldn’t resolve anything, he said.
A prominent member of the Kurdish team, Patriotic Union of Kurdistan spokesman Saadi Ahmed Pira, said Iraqi officials seemed to be aware of their past mistakes toward the Kurdish region and had pledged to iron out differences. The Kurdish delegation will meet with Barzani on Wednesday to assess progress, he said.
Denemec’s comments reflect the concern in Ankara though as the talks drag on without a public statement of progress toward agreeing the political and economic concessions necessary to avoid a split of OPEC’s second-biggest oil producer.
Sunni power Turkey has for years enjoyed closer ties to the Kurds than with the Shiite-led central government in Baghdad, which is backed by Iran, providing a key route to market for the Kurdish oil industry. But the chaos that could follow any break-up as well as Turkey’s domestic security concerns mean it has opposed Kurdish statehood.
Markets Calm
Investors appear to have confidence an agreement will be reached and the vote called off. The yield on dollar denominated Iraqi government bonds due for 2023 has fallen by more than 30 basis points since Aug. 11, to 6.47 percent on Monday. The securities are still trading at a premium over the pricing on the day of their issuance this month. The country’s five-year credit default swaps, the cost of protecting debt against default, fell more than 10 basis points over the past month to 520 on Monday.
“The referendum, if it takes place, will likely have less of a direct economic impact on the central government, given the large autonomy of the KRG already,” said Trieu Pham, London-based emerging-markets credit strategy analyst at MUFG Securities. “While Iraq has been a good recovery story, current pricing might not fully incorporate those risks.”
— With assistance by Selcuk Gokoluk

China-Kyrgyzstan-Uzbekistan railway: Who is going to pay?