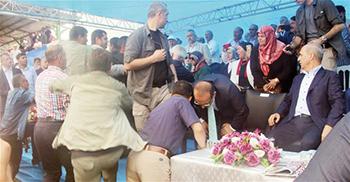 A total of 22 provincial police chiefs have been reshuffled with a decree issued by the Interior Ministry published in the Official Gazette on Aug. 19.

Assignments and reshuffles have also been made in the Gendarmerie General Command, local authorities, and police department.

According to the ministry, three police school chiefs and seven central unit heads have also been changed as part of the decrees.

The newly-appointed female deputy governors will be in charge of issues regarding women and family.

A major change also took place in the security general directorate. Servet Yılmaz, who was Turkey’s deputy police chief in charge of critical departments such as anti-terror and struggle against smuggling and organized crime, became Ankara Police Chief.

Mahmut Karaaslan, who was the previous Ankara police chief, resigned after finding out he was called to center.

Speaking to daily Hürriyet on Aug. 19, Karaaslan said it was his personal decision.

“This is completely my personal decision. I saw it fit. I asked for my retirement,” Karaaslan said.

Another deputy police chief Mehmet Akdeniz was called to center and the police chief of the southeastern province of Gaziantep, Erhan Gülveren, was appointed to replace him.

One of the attention-grabbing changes concerned the Black Sea province of Ordu. Ordu Police Chief Suat Çelik, who previously came to the agenda with a brawl that erupted during an event in the protocol seats, had initially been called to center as police chief inspector and then had been appointed as the head of the special security inspectors.

Çelik previously applied to the Interior Ministry to be assigned under the Security General Directorate after the brawl that included Mayor Enver Yılmaz from the ruling Justice and Development Party (AKP). Culture and Tourism Minister Numan Kurtulmuş barely survived the brawl, prompting Çelik to take annual leave.

Mehmet Erduğan was appointed to Çelik’s post after the decree.