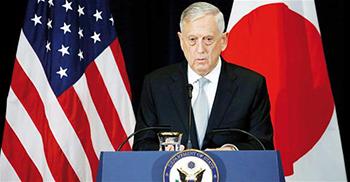 The United States has no intention to extend its presence in Syria after defeating the Islamic State of Iraq and the Levant (ISIL), U.S. State Department spokesperson Heather Nauert has said, denying the Syrian Democratic Forces’ (SDF) comments that U.S. forces may remain in the country with long-term intentions.

“Our overall mission is to defeat ISIS, whether it’s in Iraq or in Syria. That is our intent to defeat ISIS and not do anything more than that,” Nauert said, using another acronym for ISIL, at a press conference on Aug. 18.

The U.S. State Department’s statement came after SDF spokesperson Talal Silo has reportedly claimed that the U.S. will remain in Syria for decades after ISIL is defeated and even establish a military base in the country as an alternative to İncirlik Air Base in Turkey.

Washington denied the reports, as Nauert said, “We want Syria governed by Syrians not by the United States, not by any other forces but by Syrians.”

US Defense Secretary Mattis in Turkey

Washington reiterated its stance on its presence in Syria, as U.S. Secretary of Defense James Mattis is set to travel to Jordan, Turkey and Ukraine later this month.

Mattis will first visit Jordan, a member of the U.S.-led coalition fighting ISIL, and then travel to Turkey to meet Turkish officials including President Recep Tayyip Erdoğan.

“Secretary Mattis will emphasize the steadfast commitment of the United States to Turkey as a NATO ally and strategic partner, seek to collaborate on efforts to advance regional stability, and look for ways to help Turkey address its legitimate security concerns – including the fight against the PKK,” the Pentagon stated on Aug. 18.

With ISIL half defeated in Raqqa, Pentagon does not intend to break its partnership with the Syrian Kurdish People’s Protection Units (YPG), which Turkey considers as the Syrian offshoot of the outlawed Kurdistan Workers’ Party (PKK).

It is reported that Mattis may bring up new strategies in Turkey’s fight against PKK.