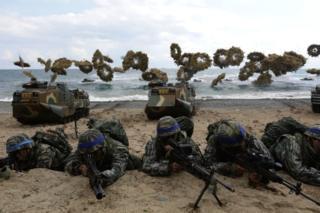 The US and South Korea are conducting annual military drills which consistently infuriate Pyongyang, despite appeals to halt the exercise.
Last week North Korea appeared to back down from a threat to send missiles towards the US Pacific island of Guam, but said it would watch US actions.

It has already condemned these drills as pouring “gasoline on fire”.
Washington describes the drills as defensive in nature, but the North sees them as preparation for invasion.
China and Russia had in July proposed a halt on military exercises in exchange for a freeze on missile tests.
But Joseph Dunford, chairman of the US Joint Chiefs of Staff, said last week that the military exercises were “not currently on the table as part of the negotiation at any level” and the Ulchi-Freedom Guardian (UFG) exercises were going ahead as planned.
The US have said these exercises will involve about 17,500 US troops, largely involved in the computer simulation side of the drills. The exercises will last for about 10 days.
But after North Korea’s threats on Guam and an almost unprecedented war of words over Pyongyang’s repeated missile tests, analysts have warned that the joint drills may be seen as a provocation at a particularly sensitive time.
On Sunday an editorial in North Korea’s official government newspaper, the Rodong Sinmun said the exercises would worsen the state of the peninsula and warned of an “uncontrollable phase of a nuclear war”.
What are these drills?
The US and South Korea hold two sets of war games every year, involving a massive number of troops and military hardware.
Foal Eagle/Key Resolve is usually held in spring, while Ulchi-Freedom Guardian (UFG) is in autumn.
Both involve land, sea and air military drills and computer simulations. Held in South Korea, they have also involved practice drills for terror and chemical attacks in recent years.
South Korea usually deploys about 50,000 troops while the US typically sends 25,000 to 30,000 soldiers.
They can also sometimes involve troops from other allies – last year’s UFG saw the participation of nine other countries.
What has been the rhetoric around them?
Both events routinely anger North Korea, which insists that the exercises are rehearsals for an invasion.
Last week, North Korean state media accused the US of “trying to ratchet up war frenzy while covering up the invasive nature” of the UFG exercise, while in 2010 it said the drills showed the US and South Korea were “harassers of peace and warmongers keen to bring a war to this land”.
Earlier this year during Foal Eagle/Key Resolve it warned it would “mercilessly foil the nuclear war racket of the aggressors with its treasured nuclear sword of justice”.
But while it has frequently threatened serious retaliation, it usually ends up conducting shows of force, such as firing missiles or moving troops.
The US and South Korea say that the exercises are purely for defence purposes, and based out of a mutual defence agreement they signed in 1953.
They also say the exercises are necessary to strengthen their readiness in case of an external attack.
Have the drills caused conflict before?
Depending on the political climate, the drills have at times exacerbated relations between the two sides.
The UFG drill in 2015 took place amid high tensions, which resulted in North and South Korea exchanging artillery fire across the border.
Military officials took the unusual step of halting the UFG while emergency talks were held between the North and South. The drill resumed several days later.