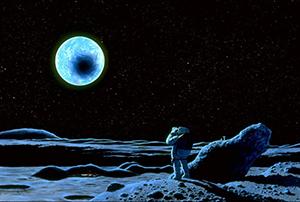 Marina Koren
Pat Rawlings was thinking about next week’s eclipse nearly 30 years ago.

Rawlings has spent more than three decades as a space illustrator, creating scenes of human exploration in the cosmos, from spacecraft in orbit to astronauts on alien terrain. While preparing for a trip from his home in Texas to Idaho, where he’ll observe Monday’s eclipse with other space artists in the International Association of Astronomical Artists, he remembered a painting he’d made years ago for this very occasion. In 1989, Rawlings was working on illustrations for a collection of children’s science books by the science-fiction writer Isaac Asimov. Using acrylics, he painted a view of a solar eclipse as seen from the moon, and named it after the date when the next eclipse would cross over the continental United States: August 21, 2017.
This week, Rawlings tweeted a photo of the painting, which is at the top of this story. “I actually thought 28 years in the future tourists might watch the eclipse from the Moon,” he wrote. “Sigh.”
Rawlings said that when he created the work in 1989, the thought of humans watching the eclipse on the moon didn’t seem like an impossibility. Back then, he was working for a Houston-based company that was conducting studies for NASA on potential lunar bases.
“The future seemed to be such a wide-open book that we could pretty much write whatever sort of future we wanted,” Rawlings said in an interview. “So I optimistically thought we’d be able to watch the eclipse from the moon.”
The late 1980s were an exciting time for American human spaceflight. “The shuttle [program] was going full tilt, we were talking about building a space station,” he said. “A lot of things were going on that made you feel like the future was accelerating at a pretty rapid pace.”
Rawlings sold the original painting to a private collector 15 years ago. He created more than 50 paintings of scenes from the lunar surface, informed by careful study of many photos from the Apollo missions.
The moon barely has an atmosphere, which means, for artists, that there’s no atmospheric perspective to work with.
A solar eclipse occurs when the moon passes between the sun and Earth, blocking sunlight and casting the moon’s shadow on the planet. Some parts of Earth fall inside a region that experiences complete darkness, known as the path of totality. Inside this path, a total solar eclipse looks like a black ball in the sky with wisps of light streaming out around it.
On the moon, a solar eclipse makes Earth look like a giant eyeball staring at the moon. In Rawlings’s 1989 painting, an astronaut, holding binoculars up to his helmet, stands at the edge of a crater and stares back.
The large boulder to his right is actually hundreds of yards away inside the crater and is about the size of a ship, Rawlings said. If you look closely, you can see two more astronauts there. The boulder appears as if it’s right next to the foreground astronaut because the moon barely has an atmosphere, which means, for artists, that there’s no atmospheric perspective to work with, Rawlings said. Imagine a painting of a mountain range. The colors of the mountains in the distance may blend with the colors of the sky and appear less saturated, while the mountains closest to the viewer retain their bright colors. This perspective suggests to the viewer that the muted mountains are farther away than those in the foreground.
It’s a fantastical scene, but Rawlings was careful to estimate how large and bright the Earth would appear from the lunar surface. The full Earth is far more luminous as viewed from the moon than the moon is when it’s viewed from Earth. The blue blanketing the surface in the painting is the intense light reflecting off the planet’s oceans.
“Whenever I do paintings or any sort of art like this, I try to create almost a daydream of what it would be like,” Rawlings said. “I imagine, in three dimensions, what the craters look like and then I start mentally walking around in that scene thinking, where would someone go to see it? They’d go to a high point. They’d want to feel like they had the best, unobstructed view they could get.”
The lunar surface is just about the most unobstructed view of an eclipse one could get. Sure, there’s no life-sustaining atmosphere. But at least there aren’t any clouds to block the sight.