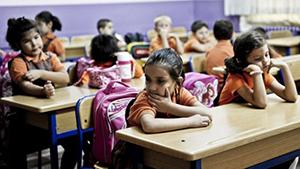 By Selin Girit -BBC News, Istanbul
“In Turkey, education was never secular. There were already obligatory classes on religion. But now, the introduction of the concept of jihad is just horrendous.”

From September Turkey will have a new education curriculum and this 38-year-old mother is among many parents who are worried. The changes affect first, fifth- and ninth-grade students, and the main controversy surrounds the exclusion of the theory of evolution from secondary education.
“In classes, nine- and 10-year-old students have been memorising prayers from the Koran. I believe religious education should be given at home, not in schools,” said the woman, who did not want to be named, due to security concerns.
Other controversial changes include shortening the time allocated to studying the life of Turkey’s secularist founder Mustafa Kemal Ataturk, an introduction to the concept of jihad and more classes on religion.
The coup attempt that took place last year also features prominently in the proposed curriculum.
The secular opposition in Turkey says President Recep Tayyip Erdogan and the governing AK party are trying to move the country away from its founding values, and make society more Islamic and conservative. Mr Erdogan has repeatedly expressed his ambition to raise pious generations.
Education Minister Ismet Yilmaz told the BBC that they had excluded only “unnecessary, archaic and repetitive subjects” from the curriculum and that it was not fair to have a debate over a few issues, when more than 100,000 changes had been made.
Removing Darwin from schools?
Mr Yilmaz denied that evolution theory was being completely omitted from secondary education.
“We are not against evolution. If science says something, it is impossible to resist it. Also, the subjects on inheritance, mutation, modification and adaptation are still present in the curriculum. These are all within the theory of evolution,” Mr Yilmaz argued.
“We only say this: Let’s not teach this subject at this level, but delay it to undergraduate study,” he added.
But critics have argued that the initial chapter on the origins of man has been excluded from the curriculum. Excluding that, but retaining further concepts from the evolution theory, is unhelpful, they say.
“Students need to understand the theory of evolution before they can make sense of concepts such as mutation or adaptation. If you do not teach them what evolution is, but talk to them about these subjects, they will be inclined to just memorise, without learning,” said Aysel Madra from the non-profit think tank Education Reform Initiative.
Head of Egitim-Is, one of the biggest teachers’ unions in Turkey, says the most crucial chapter in the theory of evolution has been dropped.
“They want to teach about the origins of man as it is written in religious texts, as if we all descended from Adam and Eve,” Orhan Yildirim said.
‘Normalising jihad in schools’
He also criticised the introduction of the concept of jihad in secondary school education.
“Ask anyone coming out of a mosque today what he understands by the word jihad – 99% would say that they see jihad as the main reason for war in the Middle East. We will not let the government put a spin on the word and normalise the concept of jihad,” he said.
According to the dictionary of the Institute of Turkish Language, jihad is an Arabic word meaning “a religious war”.
Education Minister Ismet Yilmaz argued that the word was misinterpreted and what it actually meant was to serve the community, to increase welfare, to secure peace and understanding of one another.
We are not against evolution. If science says something, it is impossible to resist it. Subjects on inheritance, mutation, modification and adaptation are still present”
The education ministry says the curriculum was changed through consultation with more than 180,000 people, who shared their comments on the draft.
But the opposition teachers’ unions say they were not consulted, and that preparation of the draft curriculum was not transparent.
Orhan Yildirim argued the changes to the curriculum were ideological.
“This curriculum is a coup d’etat targeting education in Turkey. You don’t have to have guns to make a coup. If you strike a country’s education as such, then it will be impossible for it to catch up with prosperous nations,” he said.