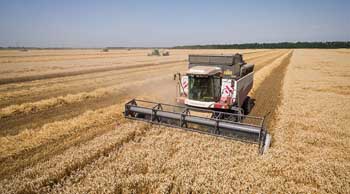 Russia is forecast to produce a record grain crop this year, exceeding the numbers last seen in 1978.
According to the Moscow-based grain consultant ProZerno, Russia is expected to harvest 130.7 million metric tons this year. It is 2.6 percent more than the previous record set in 1978 before the Soviet-Afghan War.

ProZerno predicts a record harvest of wheat of 80.1 million tons. Barley is expected to reach 19 million tons. “Corn is not that far at 16.3 million tons, which is also a record,” said Vladimir Petrichenko, director general of the company in an interview with Agroinvestor.ru.
Petrichenko added that Russia could set a record harvest of peas and beans. He admitted there could be problems with storage of the record crop in several regions of Russia.
Russia has been investing more in agriculture after the United States and the European Union imposed sanctions over the conflict in eastern Ukraine.
“More funds are invested in the industry, which allows using quality seeds, plant protection products, efficient machinery,”said Petrichenko, explaining the growth in Russian grain production.
Russia is the world’s largest grain producer and wheat exporter.