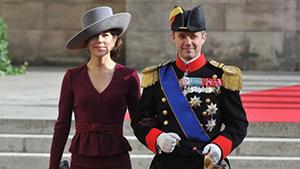 A Danish prince was temporarily denied entry to a bar in the Australian city of Brisbane because he did not have proper identification, local media say.

Crown Prince Frederik, 49, and his entourage were reportedly only able to get into the bar with the help of diplomatic protection police officers.
They are said to have told staff proof of ID in this case was not necessary.
Queensland and other states in Australia have strict rules about entering premises which sell alcohol.
In most cases, late-night drinkers in Queensland must have their passports or driving licences to prove their identities when entering establishments that stay open after midnight.
The state government says the laws introduced in July are in place “to minimise the risk of alcohol-related harm”.
Prince Frederik and his aides were in Brisbane for a yachting regatta, local media reported. They were only allowed into the bar after civil servants gave permission for the ID requirements to be waived.
Bar co-owner Phil Hogan told the Brisbane Courier Mail that the new rules were “a nightmare”, and that foreign dignitaries should be exempted.
“This is just the tip of the iceberg with the prince. It’s happening all the time with normal people,” he said.
The paper described the latest incident as a “cringe inducing blunder” resulting from “the draconian lockout laws, which are regularly catching out backpackers, foreign tourists and business travellers”.
About 12 French winemakers without proper ID were turned away in July from The Gresham, one of Brisbane’s best-known bars, the paper reported.
Prince Frederik famously met his wife, then known as Mary Donaldson, in a pub in Sydney during the 2000 Olympics.