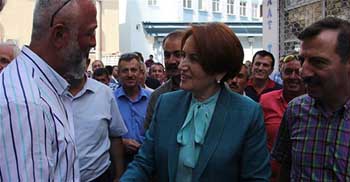 Meral Akşener, an expelled dissident member of the Nationalist Movement Party (MHP) accelerated her efforts to form a new party as MHP lawmaker Koray Aydın is set to announce that he will join the new party.

“We are working on announcing the new party by late October,” Akşener said, responding to reporters’ questions on Aug. 20 at a ceremony she attended.

The party has also determined their party building in Ankara on Mustafa Kemal Boulevard, a location interpreted to carry a political message as it is named after the founder of the Turkish Republic Mustafa Kemal Atatürk.

MHP Trabzon lawmaker Koray Aydın will also join the new political party, and is set to announce his support with a joint meeting with Akşener on Aug. 22, daily Habertürk reported.

Koray Aydın is the only MHP member left among the dissident names that proposed Akşener as a candidate for MHP leadership in the extraordinary congress attempt in 2016.

Ümit Özdağ, Sinan Oğan, and Meral Akşener had been dismissed from the party following the congress effort, while Aydın continued his political career in the nationalist party.

After the MHP leader Devlet Bahçeli formed an alliance with the ruling Justice and Development Party (AKP) in preparation of the constitutional amendment charter that ushers an “executive presidential system change,” some lawmakers have also announced their resignation from the party.

Following the dismissal and the constitutional referendum process, Akşener has accelerated her efforts to form a new political party as an alternative in “Turkey’s central political scenery.”

“There is a need for an alternative political structure that can be trusted as an alternative. There is an expectation for a political movement. This movement thinks with national reflexes rather than being characterized as left or right,” he said.

“It will be a party that defends the basic principles of the Republic of Turkey. Everybody will find themselves here. There are things that both the AKP and the CHP [main opposition Republican People’s Party] are defending,” he said.

The party will also participate in the following presidential and parliamentary elections that took place in 2019 when the new system will take effect.

“Our aim is to win the presidential election,” Halaçoğlu added.